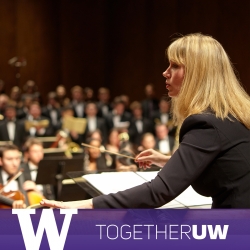 Giselle Wyers and the University Chorale performed at the UW's "Together" event on Oct. 21 (Photo: Steve Korn).

New publications, international performances, and acquisition of rare instruments are among recent activities of UW School of Music faculty. Below are just a few accomplishments reported in the opening weeks of Autumn 2016.

Music historian George Bozarth has recently published a new critical edition of Johannes Brahms's complete works for organ in the Johannes Brahms Gesamtausgabe, which is being produced in Kiel and published by G. Henle in Munich.  His 1990 "Henle Urtext" edition, which has become the standard edition used by organists worldwide, is now superseded.  His new edition is expected to appear as a "Henle Urtext" volume by the end of 2016.

Bozarth owns a large collection of historic keyboard instruments, and has now added to it replicas of a Baroque Lautenwerk—J.S. Bach owned two of these gut-strung harpsichords—by Stephen Sørli and a Johann Fritz six-octave grand fortepiano (Vienna, 1814) by Christopher Clarke.  Both instruments will make their Seattle debuts in a duo recital by cellist Nathan Whitaker and fortepianist Tamara Friedman on December 3rd and 4th on the Gallery Concerts series, of which Bozarth is the long-time Artistic Director.

Douglas Cleveland, John Delo Faculty Fellow in Organ at the University of Washington, recently performed organ recitals in Tokyo and Taipei, and taught masterclasses to organ students at Rikkyo University in Tokyo and Taiwan Theological Seminary.  This season he also served on the jury of the 2016 Miami International Organ Competition and the 2016 Longwood Gardens International Organ Competition near Philadelphia. Recent domestic performances include the world premiere of “Elegy” of Henry Mollicone with Ben Lulich, principal clarinetist of the Seattle Symphony as part of his organ recital for the Seattle Symphony Organ Series at Benaroya Hall, as well as the opening recital at the 2015 American Guild of Organists Convention in San Diego. This summer Cleveland will be performing at organ festivals in Bergen, Norway, Reykjavik, Iceland, and Aarhus and Copenhagen, Denmark

The artist-in-residence and his spouse and musical partner, Maria Larionoff, violin, appear with the String Orchestra of the Rockies in Missoula, Mont. In November, performing Schoenberg Transfigured Night, Schubert and more. Lieberman also reports that his YouTube channel for double bassists, which he established in 2014, recently passed the 300,000 mark in audience views.

The piano professor has recently performed recitals and led master classes at several universities, including at the Beijing International Piano Festival. In other recent activities, Dr. McCabe:

Michael Partington's video for the recently premiered work "Watts Chapel," written for him by Welsh composer Stephen Goss, was Classical Guitar Magazine's video of the week (see video elsewhere in this issue).

In other news, Partington returned to Spain in August for performances along the Camino de Santiago and in Chinchòn. In October he was a featured artist at the Texas A&M International Guitar Symposium, performing, teaching, and adjudicating. In November the guitarist toured with duo partner Marc Teicholz of the San Francisco Conservatory and in December he completes the second of two fall residencies at the University of British Columbia in Vancouver.

The UW’s head of orchestra activities was a finalist this past year for the American Prize—Vytautas Marijosius Memorial Award in Orchestral Programming in the college/university division. The honor recognizes his programming of the 2013-14 season of the UW Symphony, during which the orchestra performed 27 works, from the baroque through the 20th century.

In addition to his programming prowess, Rahbee presides over a steadily growing orchestr, program. While the UW Symphony continues to welcome students from all departments, Dr. Rahbee has expanded the Campus Philharmonia, which he established in 2014, to two full orchestras, each led by graduate students of the orchestral conducting program.

The Music History associate professor is serving as program committee chair for the Pacific Northwest Chapter of the American Musicological Society’s spring conference, to be hosted by the School of Music April 8-9, 2017. In other activities, Rumph is participating for the second year in the colloquium "Theology, Music, and Modernity," hosted by the Yale Institute of Sacred Music and Duke Theological Seminary.

The UW's director of band activities will be a guest professor at Tsinghua University in Beijing, China in December. While in Beijing, Prof. Salzman will deliver a series of lectures on repertoire and conducting pedagogy and will serve as guest conductor of the Tsinghua University Wind Ensemble for a December 18th concert. Tsinghua University and the University of Washington recently signed a groundbreaking Global Innovation Exchange agreement. Shortly after returning from China he will serve as an adjudicator for ‘La Grande Parade de Paris, Champs Elysées’ on New Year’s Day in Paris. The parade takes place along the Champs Elysées, between Place de La Concorde and the Arc de Triomphe. This past summer Prof. Salzman served as a master class presenter for Inspire Arts and Music of Boston, making presentations in Texas, Ohio, and Indiana.

Piano Professor Craig Sheppard's recent concerts have included performances of the 24 Preludes and Fugues of Shostakovich, Opus 87, in New York (Bargemusic), the University of Minnesota, Northwestern University, the Royal College of Music (London), the Jerusalem Music Center, and the Norwegian Academy of Music (Oslo). In other recent news Professor Sheppard:

The Music History professor reports two new publications: the essay “A Listener’s Smile” in Good Vibrations: Brian Wilson and the Beach Boys in Critical Perspective, edited by Philip Lambert (Ann Arbor: University of Michigan Press, 2016) and “Varieties of Hearing Loss: A Lament for the Modern Ear,” published in the online Society for American Music eBulletin, Fall 2016.

In other recent news: