A Musical Thank You from Scholarship Recipients 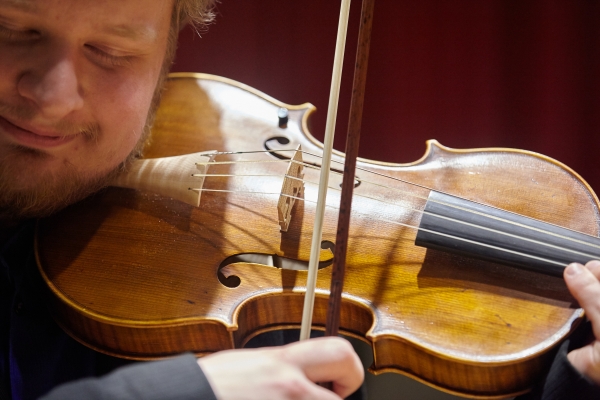 Each year, upwards of 150 students pursuing undergraduate and graduate degrees in the UW School of Music benefit from the scholarship support of alumni and friends, and on Feb. 12, some of this year’s recipients will make music to express their thanks for all this support makes possible.

The UW Music Scholarship Recipient Concert on Feb. 12 presents some of the school’s most promising students in performance, including recipients of the prestigious Brechemin Scholarship, which has provided critical support to students at the School of Music for more than five decades.

Originally established by the Brechemin Family Foundation as a scholarship fund to support students pursuing degrees in Music History and Literature, the scholarship has developed over the years into the most expansive single source of scholarship funding for students of the School of Music.

Two current UW Music faculty—Michael Partington and Robin McCabe—were recipients of the scholarship while students at the UW. Partington, head of the School of Music’s guitar program, earned his undergraduate degree in music at the UW. Receiving the Brechemin Scholarship, he says, was an important turning point in his education—he started at the UW as an English major—and ultimately his life’s career path.

“My guitar teacher at the time suggested I take the music scholarship auditions, and when they offered me the Brechemin Scholarship I decided I should probably do music,” Partington says. “While at the UW, I started playing competitions and performing, and I recorded my first CD in my senior year.”

Robin McCabe, longtime UW piano professor, was awarded the scholarship three of her four undergraduate years at the School of Music. “The family name of Brechemin was famous back then, as Charlotte and Louis Brechemin were the first donors to come forward and create annual scholarship awards for various areas of the school,” she says.

“Charlotte Brechemin used to come to the scholarship finals. She sat in the back row and ‘reviewed’ the results of her generosity, as we paraded out and performed on our various instruments. Years later, after I arrived here from New York, as a new assistant professor at the school, I had the honor of playing the dedication recital celebrating the remodeling of Brechemin Auditorium. Charlotte’s daughter, Mina, was there, in the first row, cheering me on. Talk about coming full circle!”

Current strings student Corentin Pokorny, who received the award this past year, says the award’s benefits for him were two-fold: “Receiving the Brechemin Scholarship was more than just a great financial help for my time at the University, but it was a reward in itself,” he says. “It validated all the hard work I put in, and made me feel like I had really accomplished something.”

Recipients of the School of Music’s named scholarships, fellowships and support funds will join the Brechemin scholars in the Feb. 12 performance, 2 p.m. Brechemin Auditorium. Details will be posted here as performers and repertoire are finalized.