Life is Endless Like Our Field of Vision, Brooklyn, NY: New World Records (80758) 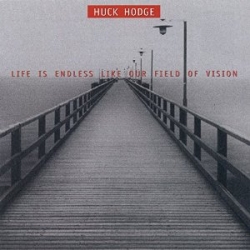 The music of Huck Hodge (b. 1977) draws extensively, if obliquely, on experiences from his northwestern American heritage. Uniquely Northwestern light patterns act as an inspiration in much of his music - the way that a piercing slant of light, breaking through a dreary Seattle cloudscape, casts an intense, otherworldlychiaroscuro on the landscape - the ethereal yellowness of the light in bas-relief against the yawning darkness of the sky. These stark contrasts in light and dark find their way into his striking combination of pure and dissonant harmonies, widely spaced orchestrations and vast, diffuse timbres. The works on this CD, written over a period of half a dozen years, display a breadth of conception that is refreshing to encounter in such a young composer while also indicating the process of rapid development that has characterized his trajectory so far.

Certainly, the music is engaging on a very immediate level: many of the sounds are strikingly new, not only in themselves but in the originality of their combinations. You may never before have heard the melodica, for example, as a concert instrument; you have definitely never before heard it subjected to live processing in ensemble with an amplified string quartet.  Many of the novel performance techniques incorporated into his scores are designed to negotiate pathways between definite pitch, indefinite pitch, and noise. Even more important to Hodge than the immediacy of sonic impression, however, is the idea that gives rise to a piece in the first place, which he speaks of as the "extra-musical": not for the sake of constructing some kind of program, but rather as a matter of "uncovering some essential formal or expressive quality that can be reconstituted in music." The sources of such ideas are as various as his compositions: literature, philosophy, visual art, even the natural world have all served in this capacity at one time or another.