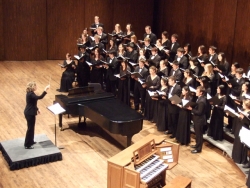 The University Chorale presents "Out of Darkness," a program of works for classical saxophone and choir, with special guest, faculty saxophonist Michael Brockman. The program features the world premiere of Brockman’s Eka Satya for choir, saxophone and cello, and Wyers’ “A Lantern Voice."  UW graduate student Sonja Mykelbust is featured cellist.

A note from Giselle Wyers:
All of these pieces deal with how to rise above darkness – in the world, in spiritual life, in humanity OR celebrate life and light already manifest! including the blinding sunlight of “Noon” or the beautiful “holy priests cast on the dark plane of evening” in “Lantern Voice”

Giselle Wyers: *A Lantern Voice,  piano
This piece will be premiered May 3 by Cascadian Chorale, as part of Giselle Wyers' year of serving as composer-in-residence.  The text features a combination of two poems by Stephen Crane, and is dedicated to the child orphans and victims of the current civil war in Syria.

Say ye to the Righteous

Ye Shall Have a Song

Michael Brockman, DMA, moved from the East Coast to Seattle in 1987 to join the UW School of Music faculty. He instructs concert and jazz saxophone performance, and jazz arranging and composition. Brockman earned a Doctor of Musical Arts from the UW, and a Master of Music degree with distinction from the New England Conservatory in Boston, where he studied arranging with Jaki Byard, composition with George Russell, and woodwind performance with Joe Allard. He earned a bachelor of music degree from Lewis and Clark College, and also attended both the Berklee College of Music in Boston, and the Musikhochschule in Cologne, Germany.

Brockman's doctoral dissertation is titled "Orchestration Techniques of Duke Ellington," and he has transcribed numerous classic large ensemble scores by Ellington, Mingus, Mulligan, Lunceford, Kenton, Monk and others. He is the lead saxophonist and co-director of the award-winning Seattle Repertory Jazz Orchestra, and has performed with Wynton Marsalis, Clark Terry, Frank Wess, Frank Foster, Jimmy Heath, Quincy Jones, James Moody, Benny Carter, Ernestine Anderson, Arturo Sandoval, Ella Fitzgerald, Jon Hendricks, Joe Williams, and many other luminaries of jazz. The SRJO presents the annual Duke Ellington Sacred Concert in Seattle (now in its 23rd year), plus an annual subscription concert series of rare big band works. In addition to performing in the SRJO, Brockman has prepared scores for much of the band's repertoire, based on rare vintage recordings of unpublished works by great composers.

As both a jazz soloist and a classical recitalist, he has toured throughout Europe and the eastern United States. He is an active professional performer in numerous Seattle ensembles, including the Seattle Symphony Orchestra, and appears on nationally acclaimed recordings with Jimmy Heath, the SSO, the SRJO, and Seattle drummer Clarence Acox, whose 1991 CD Joanna's Dance and 1992 CD Indigenous Groove were consecutively selected as Album of the Year by Seattle's Earshot magazine.

A perpetual student of woodwind acoustics, Brockman is the inventor of a patented device called the "Broctave Key" (U.S. Patent WO/2010/068909) that provides an additional octave/register vent to any wind instrument.