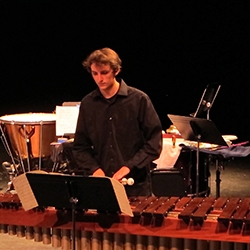 Gainsborough by Thomas Gauger
Morning of the World by William Maloof

Shannon Dudley, associate professor of Ethnomusicology, holds a PhD from the University of California at Berkeley. He teaches courses that include music of Latin America and the Caribbean, American popular music, Music and Community, Comparative Musicianship and Analysis, and graduate seminars in Ethnomusicology.  He also directs the UW steeelband.