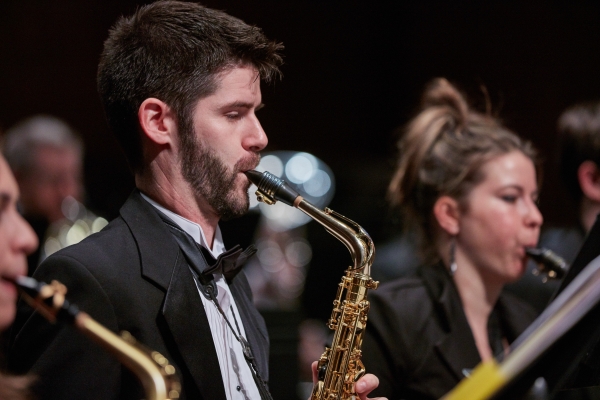 Mr. Gordon has toured extensively in Europe, North America and South America, and has performed in such prestigious festivals as Tanglewood, Lucerne and Schleswig-Holstein. As a chamber musician, he has performed with Music of Remembrance, Seattle Chamber Players and as a member of the Seattle Symphony Chamber Series, among others. In addition to his performance activities, he records frequently for radio, television, and film. A committed educator, David is a faculty member at the University of Washington, and regularly presents master classes and coachings nationwide.

A native of Narragansett, RI, David Gordon was educated at Columbia University, from which he holds a degree in philosophy, and The Juilliard School. He lives in Seattle with his wife, Seattle Symphony Principal Harp Valerie Muzzolini Gordon, daughter Anaïs, and English bulldog Massimo.

Huck Hodge writes music that explores the embodied poetics of organized sound, perceptual illusion and the threshold between design and intuition. His output is diverse and comprises a wide range of symphonic, chamber, dance and multimedia works. A composer of “harmonically fresh work", "full of both sparkle and thunder” (New York Times), his music has been praised for its “immediate impact” (Chicago Tribune),  its "clever, attractive, streamlined" qualities (NRC Handelsblad, Amsterdam) and its ability to "conjure up worlds of musical magic” with “power and charisma" (Gramophone Magazine, London).

Hodge has won an extensive array of national and international awards including the Rome Prize, the Gaudeamus Prize, the ISCM League of Composers Award, fellowships from the Guggenheim Foundation and the American Academy of Arts and Letters, the Aaron Copland Fellowship from the Bogliasco Foundation as well as awards from ASCAP, New Music USA and the Concorso Franco Donatoni in Italy. Among his many commissions are those from the Fromm Foundation at Harvard University, the Barlow Endowment, Music at the Anthology, the American Composers Forum, the American Academy in Rome, Musik der Jahrhunderte (Germany), the National Concert Hall of Taiwan, the government of the Netherlands and the Rondò Festival / Ernst von Siemens Musikstiftung (Italy/Germany).

In addition to serving as Associate Professor and Chair of Composition in the School of Music, Hodge is Director of the Seattle Symphony's Merriman Family Young Composers Workshop. Before joining the University of Washington, he taught Compositon at Columbia University in New York City, where he earned his MA and DMA studying with Tristan Murail and Fred Lerdahl. Prior to this, he studied Music Theory and Computer Music at the Staatliche Hochschule für Musik und Darstellende Kunst in Stuttgart, Germany, where his teachers included Georg Wötzer and Marco Stroppa. During this time, his studies were supported with funding from the Andrew W. Mellon Foundation and the Deutscher Akademischer Austauschdienst (DAAD).