Life is a juggling act for student Stephen O'Bent 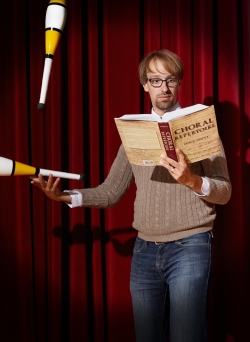 Every summer faculty and students of the School of Music disperse to far-flung locales to expand on—or retreat from—their academic endeavors. Graduate choral conducting student Stephen O’Bent is just one case in point.

Last summer the second-year grad student put down his books and papers and music scores at the end of spring quarter and picked up his green plastic trombone and juggling gear. He donned a canvas kilt and combat boots. And then he spent a good part of July and August traveling to remote outposts in Montana and Idaho with the New Old Time Chautauqua, a motley assortment of vaudeville performers, historians, and community volunteers loosely grouped around a nucleus of jugglers known as the Flying Karamazov Brothers.

Visiting six communities in Northern Idaho and Western Montana over a period of four weeks, the group shared meals, stories, comedy, and knowledge with inhabitants of small communities much in the vein of predecessors on the Chautauqua circuit, a century-old American tradition this group has been working to preserve for the past three-plus decades.

The tour marked O’Bent’s tenth summer traveling to financially depressed communities in rural Western America, performing at community centers, nursing homes, hospitals, museums, and other venues to audiences eager for culture, education, and fun. In Libby, Montana, where unemployment hovers just under 20 percent, the group’s arrival last July was heralded by the sudden appearance of 60 tents pitched on the lawn of the Memorial Center downtown and the assembling of an extensive group kitchen that immediately set forth accommodating a community potluck open to all.

The group’s three-day visit included performances at the town’s care center and assisted living facilities, agencies serving developmentally disabled clients, and at the Heritage Museum and Memorial Center, where workshop participants of all ages could learn to juggle, perform magic tricks, hear historical lectures, or learn to dance the Shim-Sham-Shimmy before enjoying the evening’s two-hour variety show.

While a direct impetus of the interest in community-building through music that brought O’Bent to the UW for graduate studies, his involvement with Chautauqua initially grew not from an interest in historical movements or even music, but rather from his love of juggling and specifically his obsession with the Flying Karamazov Brothers. He first went on Chautauqua as a means of becoming closer to his heroes and eventually became a Flying K. Brother himself, fulfilling a childhood dream.

A self-professed band nerd who grew up in a musical family, he was already reading Juggle magazine as a 13-year-old and honing his pin-throwing skills when he first saw the Flying K. Brothers perform. He tried to audition for the group but was told he was too young. He followed up with a fan email asking for tips on how to improve his chances of someday becoming a member and received a thoughtful reply that was, he says, “so nice and not patronizing, with a specific list of things to try.”

The advice he received included not only tips for improving his skill and rhythm as a juggler, but also recommendations for books to read (plays by Tom Stoppard and Shakespeare, comedy by James Thurber), movies to watch (classic comedies by the Marx Brothers, Jack Benny, W.C. Fields) and other exhortations toward broadening his theatrical and educational horizons, as well as some final wise and helpful advice: “Go to college! The more you know, the better prepared you are. And if this theatre/juggling doesn’t work out, you have an education to fall back on.”

On tour with the New Old Time Chautauqua, O’Bent’s role in the group is pivotal. As conductor and member of the 20-plus-member Fighting Instruments of Karma Marching Chamber Band/Orchestra as well as a juggler, he can be seen furiously multitasking onstage, first striking up the band and then sitting down and picking up his trombone for a few bars before running over to center stage to throw pins with his Flying K. mates in an elaborate and complex display of group comedic and rhythmic dynamics. Then he breaks away to direct—and perform—the number’s closing musical notes. O'Bent also performs spotlight numbers as one half of the duo PepperJill and Jack (The other half is his better half, Shannon O'Bent), playing songs like "Trombone Lover Man" with O'Bent as the romantic lead.

He has his work cut out for him behind the scenes as well, leading an ensemble of volunteer musicians with a lineup that changes with each tour stop. Head arranger/composer for the band, he also leads a 30-member chorus.

“I contact bands and choirs from the community schools and churches to get singers and instrumentalists to join us in the show,” he says, “which is logistically nightmarish and totally wonderful. We basically have a new contingent of musicians in every show, but we feel way more connected to the communities we visit by being able to directly share our experience with them.”

One of his most memorable experiences as a bandleader this past summer, he says, occurred when a 14-year-old girl “fresh from band camp and excited to play,” showed up at the community potluck with her mother and her saxophone, ready to join the band.

“That is why I love Chautauqua so much,” he says. “I can pretty much talk endlessly about how much I love its mission and members.”

O’Bent’s involvement with the group has also inspired new directions in his academic and professional endeavors. At the UW he is pursuing a master’s degree in choral conducting and concurrently completing a teacher certification through the Music Education program. He was drawn to Seattle by the strong sense of community he encountered at the UW after investigating schools in the Midwest where, he says, “the faculty didn’t know the graduate students’ names.” Going out to lunch with the other conducting students after his interview at UW sealed his decision, he says.

At the UW, he is involved with leading choirs such as the Men’s Glee Club, open to singers from throughout the community. “For non-music majors to have opportunities to make good music in that sort of setting is so important,” he says. He plans after graduation to continue “giving kids the opportunity to make music early on” through involvement with choirs in school.

And he has no plans to retire anytime soon from his summer tours with the Chautauqua, despite the hardships of tent sleeping, outdoor communal meals, and complicated group dynamics. After all, he says, the definition of community is “any group of people large enough to include one person you wish wasn’t there.” The embrace of community-building, by that definition, is both rewarding and challenging. For the foreseeable future, though, he is focused on his degree studies. Like any other graduate student, he’s facing competing demands, balancing obligations, and often finds himself performing a juggling act. But that is nothing new to him. Stephen O’Bent is used to that.