And the Grammy goes to...UW Music faculty and alumni 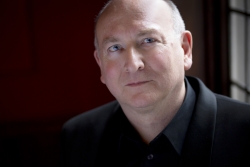 Stubbs, a senior artist-in-residence at the UW and artistic director of ensemble-in-residence Pacific MusicWorks, was recognized for work as co-artistic director, with colleague Paul O'Dette, of the Boston Early Music Festival. He and Odette shared the Grammy for best opera recording for the Boston Early Music Festival Ensemble's recording of "Charpentier: La Descente d'Orphée aux Enfers."

Reached at the School of Music a few days after the awards ceremony, Stubbs said he was thrilled with the recognition, particularly since relatively few Grammys are awarded for classical music.  "Only one Grammy is conferred in the category of opera," he said. "So I couldn't be happier."

Neuville, a former student of Thomas Harper, has secured several high-profile engagements since graduating from the School of Music in 2014. In addition to work with Conspirare, he recently sang the tenor solo in Beethoven's Ninth Symphony with the Seattle Symphony and the role of Tamino in Tacoma Opera's 2014 production of The Magic Flute. He is slated to sing Scaramuccio in Ariadne Auf Naxos with the Seattle Opera in May 2015.

The Grammy award for Seattle Symphony was the orchestra's first Grammy win. "We're so very proud that Become Ocean is recognized with a Grammy Award," Morlot, nominated with Seattle Symphony for five Grammys, said in a statement from SSO. "John Luther Adams is one of our most important contemporary American voices and I am grateful for my collaboration with him, and for the artistry and dedication of our musicians and our audio engineer Dmitriy Lipay in bringing this recording to life."

The Grammy winning faculty artists both make public UW appearances in 2015.  Stubbs conducts the Pacific MusicWorks and School of Music co-production of the Magic Flute May 8-10. He also conducts the UW Chamber Orchestra and soprano (and newly appointed faculty member) Cyndia Sieden in arias from the Magic Flute on Feb. 20.  Morlot, meanwhile, joins UW Symphony conductor David Alexender Rahbee and members of the Seattle Symphony and UW Symphony in a free side-by-side concert April 24.  All performances are at Meany Theater.

More information about SSO's and Stubbs's Grammy recognition appeared in the February 8, 2015 issue of  the Seattle Times.