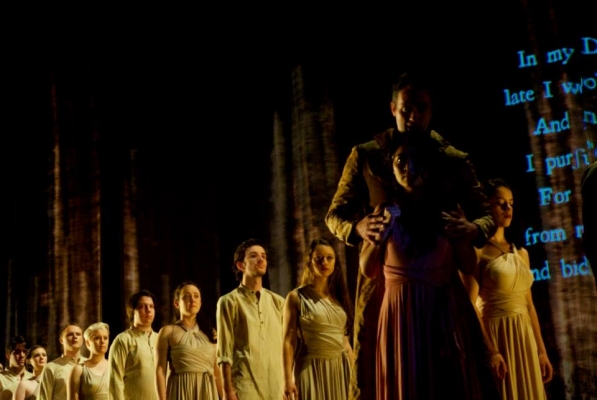 As the artistic partnership between the School of Music and Seattle production company Pacific MusicWorks enters its third academic year, PMW’s Grammy winning artistic director, Stephen Stubbs, finds himself ever more engaged and immersed in the life of the school where he earned an undergraduate degree in composition in 1975 and now serves as senior artist-in-residence.

Initial partnership activities at the UW focused primarily on full-scale professional opera productions co-presented by UW Music and PMW—a component very much still a focus of the collaboration—but each subsequent year has yielded more opportunities for students from across the school’s degree programs to benefit in myriad ways from the unique partnership. This year, students from several areas of the school will work with the celebrated conductor and his PMW colleagues in performances to be presented both on and off the UW campus.

“I've done many student productions and many professional productions, but until we started this model at the University of Washington I didn't see the full potential of how mixing professionals and students could benefit everyone and also create an exciting final product,” Stubbs says. “Each production is unique in the details of how to combine the forces, but I am more convinced than ever of the value of the experiment.”

The first of several projects slated for 2015-16 got under way just before the start of the academic year, when members of the UW Chamber Singers and director Geoffrey Boers began preparing for their upcoming participation in PMW’s season opener—a performance of Monteverdi’s 1610 Vespers to be presented Sat. Oct. 24 at Seattle’s St. James Cathedral.

Stubb’s concept for the performance places the UW’s top student singers in close proximity to soloists Charles Daniels, a tenor considered among the leading Monteverdi singers of our time, and cornetto virtuoso Bruce Dickey, among other exceptional singers and the talented musicians of the PMW Orchestra.

“It is a great testament to the quality of our Chamber Singers and graduate choral conducting students that they can prepare these masterworks over and above their performance schedule here on campus,” Boers says. “They are working hard, and enjoying the process, the music, and working with Stephen.”

This year three of PMW’s four season events take place on the UW campus, and UW Music students will play roles—to greater or lesser degree—in all of those productions.  The UW Chamber Singers once again figure prominently in PMW’s December presentation of Handel’s Messiah, in which the soloists, true to Handel’s practice, will be embedded in the choir.

Choral singers again work with Stubbs—and UW Symphony conductor David Alexander Rahbee—in April, when the combined Chamber Singers and University Chorale join with the UW Chamber Orchestra in a performance at Seattle’s Benaroya Hall. The April 25 concert of works by Handel and Gluck marks the run-up to the UW Music-PMW presentation of Gluck’s Orphée May 20-22 at Meany Theater, which will engage UW students in cast cover roles, side by side with PMW orchestra members in the pit, and as the entire on-stage choir.

“It is a wonderful opportunity for our choral students to have these professional experiences, and to perform side by side with world-class artists,” Boers says. “It has been truly a collaborative experience, and it will be a rich year of singing, immersing ourselves in three distinct periods and styles.”

In other PMW-related activities slated for the current academic year, Stubbs’s work in fall and early winter quarters is focused on leading the UW’s Orpheus Ensemble, a group of UW vocal performance students working with the conductor to prepare a staged Jan. 8 performance of scenes from Francesco Cavalli’s 1651 opera La Calisto.

Stubbs’s colleague Tekla Cunningham, director of PMW’s orchestra, joins the UW Music faculty this fall as an instructor of baroque violin. In this capacity, she is working this year as co-director, with UW organ professor Carole Terry, of the UW’s Baroque Ensemble, directing UW music students in preparing selections for a February performance in Brechemin Auditorium. Cunningham also works one-on-one with UW strings students interested in exploring the unique challenges and joys of performing early music on period instruments.

“The School of Music has benefitted in significant and meaningful ways from its partnership with Pacific MusicWorks and Stephen Stubbs,” says Richard Karpen, director of the School of Music.  “Placing these exceptionally talented musicians in the laboratory with our students and faculty has been such a tremendously rewarding aspect of this partnership. It is exciting to see all of the many ways the collaboration is enriching the artistic and educational experiences of our students, faculty, and audience members.”