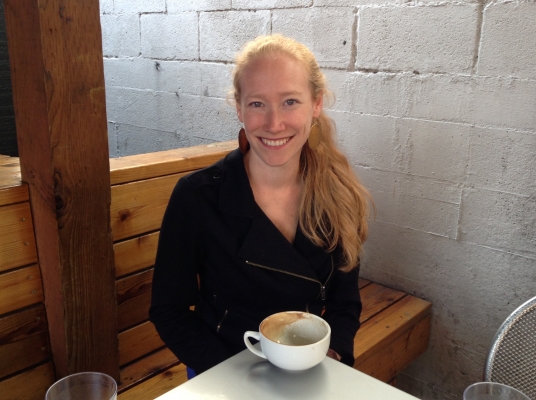 Percussionist Bonnie Whiting has been involved in music since early childhood, but it was the appeal of the stomping, tapping, and other rhythmic movements of her dance lessons that helped her find her musical focus. “I started as a dancer,” says the newly arrived chair of the UW’s Percussion Studies Program, “and I loved the rhythm of moving my body.”

Her supportive parents enrolled her in piano lessons early, but, “the best thing they ever did was allow me to quit piano lessons at the age of eight,” she says during a recent coffee break on University Avenue during the first week of Autumn Quarter. “I was a pretty flighty child, and I don’t think I would have come back to music on my own terms if they had forced me to continue. Because they gave me that freedom, music was never a chore to me. It was always fun.”

In the sixth grade when choosing which instrument to play in band, her parents were likewise supportive when she chose not flute or clarinet, but drums. “Musical instruments are expensive, but you can buy a pair of drumsticks for five dollars,” she says, and since they weren’t sure she would persevere in her playing, it seemed a safe enough investment.

Since then, she has indeed persevered, to a level of artistic achievement that places her among the best in her field. Her interest in experimental music, collaborative, interdisciplinary projects, and improvisation connects her to a robust network of musicians and artists involved with today’s new and improvised music scenes in Seattle and beyond, and her interest in the history and tradition of percussion grounds her work in the bodies of both traditional and non-traditional repertoire spanning centuries.

Recent projects include a series of concerts at the John Cage Centennial Festival in Washington DC, and performance as a soloist in Tan Dun's Water Passion under the baton of the composer himself. In 2011, she joined red fish blue fish percussion group in premiering the staged version of George Crumb’s Winds of Destiny for Ojai Festival. Whiting has collaborated with many of today's leading new music groups, including eighth blackbird, the International Contemporary Ensemble, Bang on a Can, and Ensemble Dal Niente.

In accepting the position at UW, Whiting says she saw many things to like about the School of Music’s well-established degree programs. “There are so many opportunities for percussionists here,” she says of the UW’s program, which benefits from expertise across the UW’s studio and program faculty in various disciplines. A percussion student at the UW may study timpani with Seattle Symphony principal timpanist Michael Crusoe, Javanese gamelan with Ethnomusicology’s Christina Sunardi, drumset with Ted Poor in the Jazz Studies Program, or, as Whiting puts it, “weird experimental music with me.” The possibility to study and perform across a range of styles prepares students to be adaptable, a quality that will serve them well in their lives in music.

Whiting plans to capitalize on such strengths as she assumes leadership of the program and to nurture an approach that considers both the historical and traditional role of percussion in music and “how we see a place for percussion in the future.”

Whatever might be next, expect Whiting’s approach to be collaborative. “I love commissioning new works,” she says, “I think it’s important. But I don’t want to be uninvolved in the creative process. I’m more about, ‘Let’s see what we can make together.’”

She plans to carry this approach forward into her teaching in her first year at the UW, preparing and practicing and performing alongside the students. Fall quarter will include studies in minimalism and participation in the UW Modern Ensemble’s Dec. 2 concert of music by Steve Reich. She already is considering new works by UW student and faculty composers and a range of potential projects.

“There is a body of work being created now that can only exist in a place like this,” she says, referring to the UW’s stature as a major research institution, where faculty are encouraged to experiment with nontraditional but important art forms. “The freedom to experiment, to do interdisciplinary work and to work with students to carry out that work is an amazing opportunity,” she says. “It’s an atmosphere that is incredibly freeing and so good for the students.”

And though her research and performance work will be central to her activity at the UW, she anticipates with pleasure her work one-on-one with her students. “I always knew I’d spend part of my life as a teacher,” she says, rising to return to campus for the Percussion Ensemble’s first rehearsal. “I like to make and do and to hopefully be at a level to be able to show others how to make and do. I feel so lucky to teach at the graduate and undergraduate level. Getting ready for the quarter is stressful, but all of that evaporated yesterday afternoon with the first private lessons. Down in the percussion studio, one-on-one with the student, it felt so comfortable and familiar. I thought, ‘Now here is something I really know how to do.’”

Bonnie Whiting joins the faculty of the University of Washington School of Music in Fall 2016 as artist-in-residence and head of the UW Percussion Studies Program. Learn more at: https://music.washington.edu/people/bonnie-whiting.