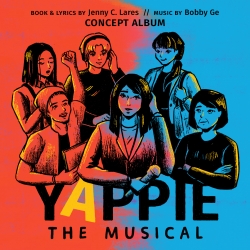 "One Path" by Yappie the Musical
original musical production - co-produced and music directed, funded by grants from the Peabody Institute of the Johns Hopkins University
People Involved:
Roger Wu Fu

As a recipient of Peabody Conservatory’s Dean’s Incentive Grant, created, produced, and music directed an original musical with a Baltimore and Washington D.C. based team of composers, writers, directors, and actors. In collaboration with Johns Hopkins University among local Maryland universities, production was to premiere in the Spring of 2020.

During the course of the Covid-19 pandemic, focus shifted to producing a fully-recorded concept album of four main numbers from the production; instrumentalists, singers, video, audio, and graphic artists were all hired from the project's initial focus on community in mind - Baltimore artists both in the professional world and the university sphere.

Yappie (a combination of YAP, a young Asian professional, and yuppie) follows the story of Grace, a young Asian professional living her best life in the corporate world. Or is she? Passed over for a promotion, Grace finds herself in the unlikeliest of places: auditioning for a musical. Having spent most of her life living up to the expectations of her family, Grace begins to question who she is, where she belongs, and what it means to be Asian American. Written by Jenny C. Lares, composed by Bobby Ge, and music directed by Roger Wu Fu, "Yappie: The Musical" promises to be a fun journey asking hard questions about identity & stereotypes with tons of empathy, warmth and lots of laughs.

Produced by Donna Ibale & Roger Wu Fu, and made possible with a generous Dean’s Incentive Grant from Peabody Institute, Peabody Institute's LAUNCHPad Grant, Marin Alsop's Alsop Entrepreneurial Award for Conductors, and in collaboration with Johns Hopkins University, "Yappie: The Musical" is set for a full-stage premiere in the near future.