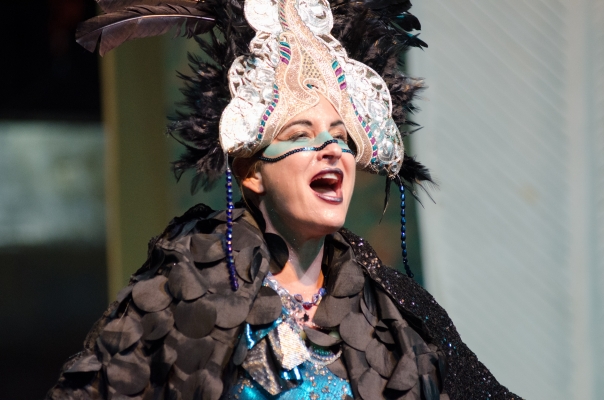 DMA Voice student Alexandra Picard was Tacoma Opera's Queen of the Night in the company's production of The Magic Flute. Peter Serko/peterserko.com

Awards, accolades, publications, and a plum role or two are among recent accomplishments of School of Music students and alumni. Read on for recent news from our current and former students.

It’s a year for Magic Flute in the Pacifc Northwest, and the UW is gearing up for its May co-production with ensemble-in-residence Pacifc MusicWorks at Meany Theater May 8-10. Tacoma Opera presented their own version of Mozart’s most beloved operatic work this fall, a unique staging developed in collaboration with the Puyallup tribe and incorporating Northwest Salish elements. School of Music students and alumni claimed a sizeable number of leading roles, including Alexandra Picard (DMA, Voice) as Queen of the Night; recent grad Eric Neuville (’14 DMA, Voice) as Tamino; Ryan Bede (’07 MM, Voice) as Papageno; Tess Altiveros (’10 MM, Voice) as Pamina, and Christina Kowalski (DMA Voice) and Sarah Mattox (former MM, Voice) as First and Third Ladies, respectively. Other UW Music students and alums involved in the production included Lisa Prina (’13 MM, Voice), as Papagena, Craig Grayson (’12 DMA, Voice) as Sarastro, and Brandon Higa (’04 MM, Voice), as Monostotos. UW School of Drama alumnus Noel Koran, who served as resident opera director at the UW in 2008-09, was stage director, and orchestral musicians included School of Music alumnus (and staff computer specialist) Colin Todd (‘05 BA/BM, Viola) on violin and his fellow Husky (and better half) Evelyn Gottlieb (’05 MM, Strings).

Kathryn Labiak (’97 BA Music Education) was named Outstanding Middle School Music Teacher of the Year by the Washington Music Educators Association at their February convention in Yakima. A band teacher at College Place Middle School in Lynnwood, Wash., Labiak has directed bands and orchestras from elementary through high school levels , as well as serving as adjunct faculty at Central Washington University, teaching woodwind pedagogy and elementary music education classes. In addition to her public school teaching, she currently conducts one of the four orchestras (Symphonette Orchestra) with the Seattle Youth Symphony Orchestras program. She has served as a woodwind coach with SYSO and Marrowstone-in-the- City since 1996, and as a conductor since 2003.

Matt Nelson, UWSOM grad in clarinet performance and a former student of Bill McColl, has been appointed Assistant Professor of Clarinet at the University of Louisville. In addition to his role as a university teacher, he has held the position of principal clarinet with the Utah Chamber Orchestra (Ballet West)and has performed with the Houston and Utah Symphonies.

Sharyn Peterson (’81 MA Violin) sends word of musical activities in the years since graduating from the UW. After studying with violin professors Emanuel Zetlin and Denes Zsigmondy she taught violin and viola, conducted community productions and choirs, and soloed with the Thalia Symphony and Whatcom Symphony. These days she and her husband, Milo (a former Husky Marching Band First trumpeter) make their home in the Skagit Valley, where both maintain active teaching and performing careers. Peterson currently serves as Artistic Director and Conductor of the Mt Baker Youth Symphony and the Mount Vernon-based Fidalgo Youth Symphony as well as co- directing, with her husband, the private Peterson Conservatory of Music.

School of Music doctoral student Claire Anderson (PhD Ethnomusicology) provoked lively discussion last spring at the Northwest Chapter meeting of the Society of Ethnomusicology with a paper presentation that challenged some attendees views on feminism. Her paper “Female Empowerment, Agency and Nuance at the 2013 Super Bowl Halftime Show,” was awarded the Thelma Anderson Prize for best student paper presented at the annual chapter meeting.

Graduate students Kristin Lindenmuth (DMA, Voice) and David Aarons (PhD Ethnomusicology) were awarded prestigious Chester Fritz Fellowships for international study or research for the 2014-15 academic year. The awards are among the UW’s highest honors awarded to graduate students at the University. The fellowship provides support for one quarter of study in the students’ areas of interest.

Christopher Howerter (DMA, Organ) was among 15 young musicians from around the world selected to compete in the Canadian International Organ Competition held in Montreal in October.

Shortly after completing his doctoral dissertation at the UW, recent grad Eric Neuville (DMA, Voice) got a call from LAP LAMBERT Academic Publishing about his manuscript, “The Unpublished Songs of Ivor Gurney.” The respected publisher released Neuville’s exploration of the unpublished manuscripts of the English composer and poet in September 2014.

Brad Pierson (DMA, Choral Conducting) was named Assistant Professor of Music Education at Western Illinois University, where he conducts the Concert Choir and the Commercial Music Ensemble. In 2015, he is on track to launch a men's choir through the university's community music school, which he says will be a non-auditioned  ensemble made up of students, faculty, and members of the community.

Linda Moorhouse, (DMA, Wind Conducting) has been appointed Acting Director of Bands/Associate Professor of Music at the University of Illinois, Champaign-Urbana.

Dan McDonald, DMA student in instrumental wind conducting, has accepted the position of Assistant Director of Bands/Assistant  Professor of Music at Northwestern State University in Louisiana.

Jiannan Cheng, MM student in instrumental wind conducting, has been awarded a full assistantship to Cincinnati Conservatory of Music’s graduate program in orchestral conducting. Her appointment began in fall of 2014.

Neil Nanyi Qiang, a former student of Professor Craig Sheppard who is pursuing a DMA in Collaborative Piano at the University of Minnesota, has been awarded a full scholarship in the collaborative program at the Music Academy of the West in Santa Barbara for the summer of 2015.