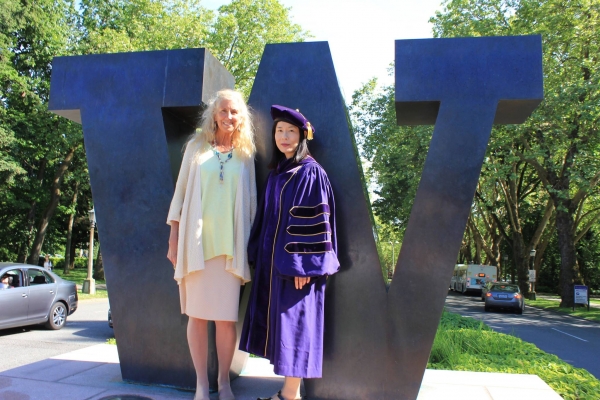 News of publications, appointments, honors, and recognition accompany UW Music students and alumni in their work at the University and in the world beyond. Summer brings a wealth of festivals, workshops, and engagements, offering the school's musicians multiple avenues toward fulfilling their musical aspirations.

UW School of Music graduate Michiko Urita recently completed doctoral studies in Ethnomusicology at the University of Washington, on the topic of kagura sacred song. The outcome of four years of meticulous attention to the performance, transmission and ritual of “Hirume”, her dissertation Silent Homage to Amaterasu: Kagura Secret Songs in Shinto Rituals of Japan addresses the sustainability of kagura hikyoku (and kagura taikyoku) in the period of Japan’s Warring States (1467-1615) and during the Meiji period, and the resilience of this Shinto ceremonial vocal music of the imperial court music and dance.

"Throughout her coursework and in the period of her dissertation, I have been much impressed with Dr. Urita’s enthusiasm and endurance for research," says faculty advisor Patricia Campbell. "She is what I see as a hard-core researcher, a scholar with a fierce intellectual energy that appears unbounded yet focused, and at times almost limitless." Dr. Urita was recently invited to academic affiliation with Japan’s Women’s University in Tokyo, and has received an invitation for a research position at Dokkyo University, Soka City.

Alumnus Steve Treseler ('15 MM, Jazz and Improvised Music) continues to carve out new creative territory for himself since completing his studies at the UW. His new book, Creativity Triggers for Musicians, was recently a number-one best seller in the Music Theory category of Amazon's Kindle store. In addition, he and DMA grad Kaley Eaton continue to collaborate on creative projects, including an upcoming two-day improvisation workshop, Game Symphony Workshop, that they will lead at Seattle Pacific University in August leading musicians through a series of activities introducing the creative practices of experimentation, play, and limitations. Participants  engage in musical adaptations of theater games, Soundpainting, creative prompts, graphic scores, improvisation with drones, collaborative composition, and variations on a theme, and the entire experience culminates in a concert of original works.

Anthony Spain ('90 DMA Conducting), conductor of Seattle's Northwest Symphony Orchestra, was awarded the American Prize in Orchestral Programming in the community orchestra category for NWSO's past season, which was dedicated to performances of music by local women composers.  The orchestra recently passed its 30-year milestone as well as a unique milestone of performing 150 works by local northwest composers.

Students from the flute studio of Donna Shin report an array of recent successes. DMA student Gemma Goday Díaz-Corralejo won two recent competitions with the National Flute Association, earning performance spot at the association’s summer convention in Minneapolis convention as winner of the Convention Performers Competition and the Baroque Flute Masterclass Competition.  In other summer activites, Goday will be a featured performer at the Oregon Bach Festival.

Miao Liu, (MM Flute 2018)j, this year's UW Woodwind/Brass/Percussion Concerto Competition Winner, recently won the 2017 Don Bushell Concerto Competition with the Seattle Philharmonic Orchestra. She competed in a final round of 25 candidates after being selected from a preliminary recorded round. She receives a cash award and a March 2018 solo appearance with the orchestra at Benaroya Hall. The Bushell Concerto Competition is named in honor of the SPO’s first Music Director, Don Bushell, who started the prestigious annual event in 1946 to provide a performance opportunity for aspiring musicians.

Miao was also among members of the UW flute studio who recently learned that they will spend this summer performing at Sewanee Summer Music Festival in TN. There, she will be performing with the festival orchestra, engaging in chamber music, and focusing on additional flute performance studies.  Laura Colmenares (BM Flute 2016), and Elise Kim (BM Flute 2020) also will be featured performers with the Sewanee Symphony this summer.

Audrey Cullen (BM Flute 2019) will be a featured performer at the ARIA International Summer Academy in Massachusetts.

Sabrina Bounds (BM Flute 2017) will be a featured performer at the Brevard Summer Music Festival in North Carolina. Sabrina has just completed a two-year term as the President of the Seattle Flute Society.

Mona Sangesland (BM Flute 2015) is graduating from the New England Conservatory with her MM degree. She will be joining Artists Striving to End Poverty (ASTEP) as a Music Fellow in India for three months this summer. There, she will be teaching music at the Shanti Bhavan Children’s Project, a rural residential school just outside Bangalore.

Eric Smedley has recently received tenure and promotion to Associate Professor at the Jacobs School of Music of Indiana University, the country’s largest school of music. Eric serves as Associate Director of Bands at IU. Eric was a graduate teaching assistant for the UW Athletic Bands from 2007 - 2010.

Linda Moorhouse was recently elected to the office of Vice President of the prestigious American Bandmasters Association. Linda currently serves as Associate Director of the School of Music and Senior Associate Director of Bands at the University of Illinois, Champaign-Urbana. Linda was UW Concert Band program teaching assistant for three years in the 1990’s.

Richard Clary was elected to the office of President of the College Band Directors National Association. Rick serves as Professor of Music and Director of Wind Ensemble Studies at Florida State University. Rick was teaching assistant for the UW Concert Band program from 1990-1993.