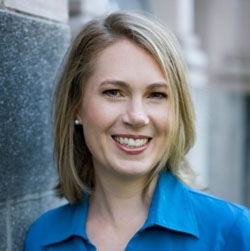 An Interview with Giselle Wyers
By Jeremiah Cawley

"It's really a team effort," says Dr. Giselle Wyers of the upcoming performance of Mendelssohn's Elijah, in which she will conduct the University of Washington Symphony Orchestra, Chamber Singers, and Chorale. In a recent interview, she further expressed her gratitude that such a major concert happens at the UW every winter quarter. She sees it as a special opportunity to collaborate with the UW Director of Orchestral Activities, Jonathan Pasternak, and for three university ensembles to perform together. Tremendous effort is required on the part of conductors, their assistants, section leaders, rehearsal accompanists, players, and singers to prepare such a large work, she says, and the collaboration has been fulfilling for students and faculty alike.

Elijah marks Dr. Wyers's first appearance with the UW Symphony Orchestra. She explains that she wanted to choose a work that was within reach of one quarter's preparation, but also one that would prove musically rewarding for all performers. The score itself traces the story of the biblical figure, Elijah, in almost operatic fashion. The choruses and the orchestration are fiery and energetic, and the character of Elijah--and therefore his music--is "very human and mercurial," as Dr. Wyers describes him.

She believes that the oratorio has much to offer contemporary performers and audiences, specifically through Elijah's complexity. "There is a lot of doubt in Elijah, and I like the honesty of that," she says. "Elijah himself is an outsider and he is persecuted." He experiences what Wyers calls "the drought of the soul."

Drought, in fact, is how the work begins. Elijah proclaims that there will be no rain as long as the nation of Israel worships Baal rather than God. As the first half progresses, the tension between Elijah and Ahab, Israel's king, mounts until Elijah and the prophets of Baal face off to see whose God is the Lord. The people call on Baal to send rain, and Elijah taunts them to call louder to provoke a response. They continue to call, to no avail. Then it is Elijah's turn to call out to God, who sends rain to Israel's praise.

As part two begins, Elijah is forced from Israel into the desert, where he wanders alone. As he wanders, he is sent an angel, who tells him to go to the mountain of God. On his way he encounters fire, tempest, and earthquake, but God resides in none of them. Rather, Elijah finds God in a still, small voice, and is taken up to heaven by fiery horses and chariots.

In choosing Elijah, Dr. Wyers hopes that the audience might come in order to hear the fires, the tempests, and the earthquakes in Mendelssohn's colorful score, but she also hopes to offer the audience a chance to experience the still, small voice that such a work can awaken.

"Any sense of true faith, validation, or victory, does not occur in the large fires or in explosions of grandeur, it occurs in silence and contemplation," she says. Dr. Wyers, the University of Washington's student musicians, and soloists Michael Drumheller, Thomas Ball, Regina Thomas, Brenna Sluiter, and Rachael Kim, will collaborate in performing Mendelssohn's Elijah on Friday March, 11 at 7:30 p.m. in Meany Hall on the UW campus.

For details and ticket information, visit the event listing here.