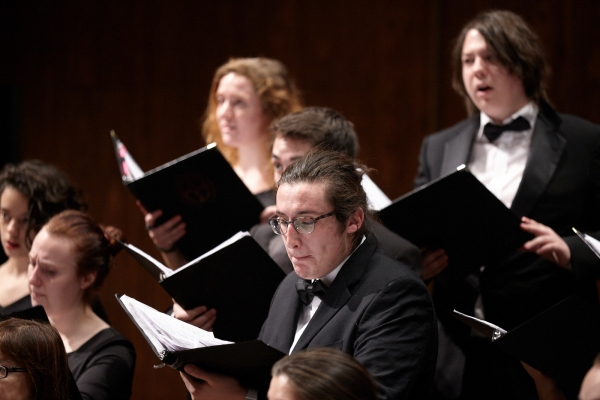 Giselle Wyers: “Sometimes I Choose a Cloud,” “Song is the Infinite Time,” and two movements from “And All Shall Be Well”

Steve Danielson: "Take Me Back"

Geoffrey Boers is Director of Choral Activities at the University of Washington in Seattle, a program widely recognized as forward thinking, unique, and of great distinction. Under his direction, the graduate choral program has developed a singular mission: to nurture the whole student as conductor-teacher-servant-leader-scholar. This vision has led the program to become one of the most vibrant and innovative in the country, attracting students from around the world interested in exploring the future of our art. Through his teaching he is exploring the evolution of conducting gesture and rehearsal pedagogy and their connection with the emerging neuroscience of mirror neurons, empathy, perception, learning, and personal transformation. His exploration has led to new thoughts about conducting and teaching with regard to breath, movement, artistry, personal awareness, and cultural development. Recently, his work has led to the mentoring of local choral cohorts of teachers and conductors who are interested in building professional communities of ongoing mentorship and musical development.  He has developed such mentorship programs across the United States and Canada. In addition to these thoughts about mentorship he is actively working with other leaders in ACDA and NAfME to develop a more unified and useful system for development of musicianship, assessment, adjudication, and repertoire grading.

Geoffrey maintains an active conducting, teaching, workshop and clinic schedule; his recent engagements have included conducting concerts in Orchestra Hall in Minneapolis, Meyerson Concert Hall in Dallas, New York’s Alice Tully and Avery Fischer Hall at Lincoln Center, the Mormon Tabernacle in Salt Lake City, and Benaroya Hall in Seattle. In addition he has served as artist-in-residence in Toronto, Ontario, Mainz, Germany, as well as Seoul, Korea with the world-renown choir the Incheon City Chorale.

In addition to his position at the UW, Boers sings professionally and is the conductor of the Tacoma Symphony Chorus where he conducts both the choir and symphony players in a four-concert season.

Since his tenure at the University of Washington, the choral program has become a leader in promoting the performance, study and exchange of Baltic music in the United States. The choir has toured to the Baltic countries in 2000, 2005, 2010, and 2013. Geoffrey Boers was awarded a prestigious Royalty Research Grant in 2004 to create a Baltic Choral Library in collaboration with the UW Library as well as State and academic libraries in the Baltic. This collection of scores, manuscripts, vocal music, and writings is the first of its kind in the United States. This collection has promoted yearly exchanges with choirs and conductors from the Baltic area who travel each year to Seattle. Further, it has led to numerous UW choral students winning awards and scholarships to travel, study, and work in the Baltic countries.

As a guest conductor, Wyers has led high school honor choirs and all-state choruses in New York (Alice Tully Hall, Lincoln Center), Georgia, Missouri, Louisiana, Connecticut, Nebraska, Texas, Washington, Alaska, Idaho, and Vancouver, Canada. She has conducted semi-professional ensembles across the United States and in Germany, the Netherlands, Estonia, and Sweden. Wyers is in demand for Zoom lectures during the pandemic with Res Diversa Chamber Choir (Chile), Western Washington University (a three-week composition crash course), University of Iowa, Northern Illinois University, Montana State University, and with the Mastersingers of Milwaukee (Wisconsin). Her appearance with Kansas and Nevada All-States will take place during the 2020-21 academic year.

Wyers’ choral works are published by Santa Barbara Music Publishing Company as part of the "Giselle Wyers Choral Series," and have been performed across the United States, South America, Canada, Australia, Cuba, and numerous European cities. Her latest premiere was a 30-minute choral cycle entitled And All Shall Be Well, commissioned by the Vashon Island Chorale. In 2020, four new choral works will premiere across the United States. She is also committed to mentoring scholar-writers in the field, and serves on the editorial board of ACDA’s Choral Journal.