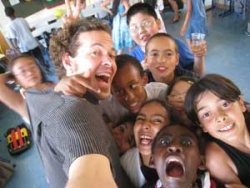 Ethnomusicology graduate student Cody Case is in Tunisia for the 2009-10 academic year, his study funded through a Fulbright U.S. Student Scholarship. Case is currently studying Arabic in Tunis, taking courses on the Maluf musical tradition in the Rashidiyya Conservatory, and learning to play the Arab lute known as the oud, his studies funded by the Fulbright Critical Language Enhancement Award. He plans to use his Fulbright research grant to study how Maluf, an Arab-Andalusian tradition that also bears Spanish, Egyptian, and Turkish influences, has influenced popular music in post-independence Tunisia since the 1960s.

"I'm planning to investigate these influences of repertory and styles on the popular music specifically through performances in marriage ceremonies," he says.

Recipients of Fulbright awards are selected on the basis of academic or professional achievement, as well as demonstrated leadership potential in their fields. Case is among more than 1,500 U.S. citizens studying abroad for the 2009-2010 academic year through the Fulbright U.S. Student Program, America's flagship international educational exchange program, sponsored by the United States Department of State, Bureau of Educational and Cultural Affairs.

Prior to his studies in Tunis, Case was teaching English at an elementary school in the Porte de Pantin neighborhood of Paris, where he used songs by classic American artists such as James Brown and Ray Charles to help French schoolchildren learn to speak English.

"It is a very diverse area populated mainly by minorities originally from North and West Africa, and far from the average 'romanticized' image of Paris," Case writes from Tunisia. "The school where I taught was Le Ecole Elementaire de Josephine Baker, which I found particularly suitable for teaching children English through American popular music." Case says music proved an effective means of helping the students begin to pronounce and memorize English words and phrases. "I discovered within the first month that these kids loved to sing," he says, "perhaps because French education is rather conservative and traditional, and I made learning fun!"