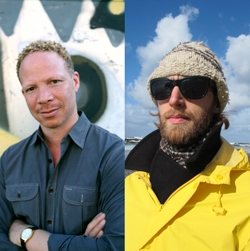 A valued sideman of Roscoe Mitchell, Chris Potter, and other modernists, Taborn has an acclaimed new ECM release, Avenging Angel, that has solidified his stature as a musical leader and one of the most original musical voices of today. He consistently earns top accolades from notable jazz publications, including Downbeat, which gave him winning rankings in its 2011 Critics Poll in the categories of Rising Star Piano, Electronic Keyboard, and Rising Star Organ. A recent profile in Jazz Times called Taborn "perhaps the most influential keyboard sideman of the past 15 years," and credited him with having "a transformative impact on the music of James Carter, Tim Berne, David Binney, Drew Gress, Shane Endsley, Chris Potter, Mat Maneri, Scott Colley, Chris Lightcap, Susie Ibarra, Carl Craig’s Innerzone Orchestra and many more."

For "Two Pianos," Taborn shares the stage with Seattle’s out-piano gem, Gust Burns, a ground-breaking composer and performer who approaches improvised/composed new music from a perspective influenced by both jazz and "classical"/avant-garde traditions as well as the rap and hip-hop music he grew up with. An organizer as well as a performer, Burns was director of the Seattle Improvised Music Festival from 2003 to 2011 and is a co-founder of gallery 1412, a Seattle music space dedicated to new and experimental music and sound.

Admission to the concert, which is part of the 2011 Earshot Jazz Festival, is free and open to the public.  Show time is at 8 p.m.

Pianist Craig Taborn also leads a workshop/clinic with UW Jazz students at 12:30 p.m. on Thursday, Oct. 13 in Music Room 35. The clinic is free and open to the public for observation.