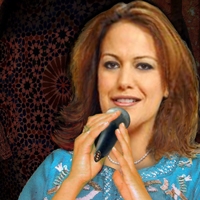 Noted singer Laila Lamrini presents a lecture-recital on malhūn, the sung poetry of Morocco, at the School of Music Brechemin Auditorium on Monday, November 14, 2012.

A member of the faculty at the Moulay Rachid conservatory in Rabat, she has performed throughout the Arab world, Europe and the United States and is considered one of the most prominent singers of malhūn poetry in Morocco. Growing up in the city of Meknes, Lamrini learned from great teachers: The late Hadj Houssein Toulali, the most famous singer of malhūn in the twentieth century, Mohamaed El Ouali, and others. For her, malhūn representes a distinctly Morroccan tradition, developed over centuries and still vibrant today.

This event, which is free and open to the public, is co-sponsored by the School of Music Ethnomusicology division and the UW Middle East Center at the Henry M. Jackson School of International Studies.