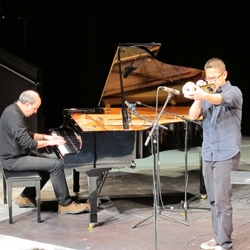 Richard Karpen and Cuong Vu of the Vu-Karpen Project

Formed to explore and invent new methods of creating works of complex, instinctive, and dramatic new music, the project, which also includes live computer interaction, seeks to make important musical discoveries while developing a concert-length work built on the foundations and traditions of jazz and Western classical art music.

Both Vu and Karpen are internationally renowned for their innovative music making. Vu is a trail-blazing jazz trumpeter/band leader/composer and Karpen is a leading composer and computer music pioneer who also plays piano in the ensemble. The Project also includes Ted Poor on drums and Luke Bergman on electric bass. Poor, known for his work with the Cuong Vu Trio, is admired internationally for his powerful, virtuosic, and intellectually intense drumming. Luke Bergman is a rising star in the jazz scene, a graduate of the UW Jazz Studies Program, and a bass instructor in the School of Music Jazz Studies Program.

The Project is focused this year on developing and recording a groundbreaking experimental work and exposing that work to a broad audience via live performances and a CD recording. "The CD will be an important documentation of the creation and performance of music that will push boundaries in the field of modern jazz and contemporary music," says Vu, who last year was awarded a UW Royalty Research Fund grant to fund the Project.