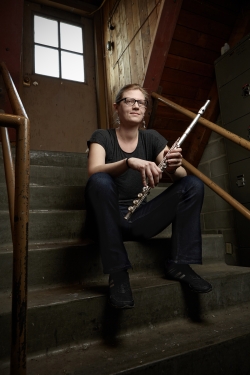 Daria Binkowski is a bit of an anomaly among music majors at the School of Music. Or perhaps it’s just that she is not a musician who is easily pigeonholed. A doctoral student in the UW’s flute performance program, she might be seen performing a Bach sonata for a visiting artist in an early music master class, or performing a caprice by Paganini at a scholarship recipients recital. But she is just as apt to take her chamber group, Inverted Space (the UW’s Modern Music Ensemble), off campus, to perform a program of sequenzas by Luciano Berio for a tavern crowd (in an event titled Beerio and billed as “an evening of beer and Berio”), or program a concert of entirely new works by UW student composers.

“You’ve got to live life," she says. "If you just stay in the practice room all day you’re going to be a boring player.”

To that end, she is constantly challenging herself and others to think outside the box, musically and otherwise. “If it’s normal, I don’t like it,” she says, a statement that might refer as aptly to her approach to life as to her musical sensibilities.

An unusually focused and accomplished young musician, Binkowski has forged a path that has taken her to heights and sights rarely seen at the student level. Her professional career in music has included a number of impressive achievements: principal flute of the China National Center for the Performing Arts Orchestra; founding member of New York’s Talea Ensemble; co-principal flute of the Hyogo Performing Arts Center Orchestra in Nishinomiya, Japan. She holds a bachelor’s degree from Eastman; a master’s from McGill. Her summer gigs included appearances at area chamber music festivals as well as a set with Talea Ensemble at the prestigious Newport Jazz Festival.

Given her educational and performance resume, it’s no surprise that School of Music director Richard Karpen selected her to play a critical role in the UW’s Modern Music Ensemble, a new student performance group established last year to present high-caliber performances of music from the mid-20th  century and beyond.

Collaborating with a core group of talented, innovative student musicians, Binkowski embraced the role with the focus and passion she has devoted all of her life to the things that interest her most—music, of course, and her flute most of all.

Growing up in New Jersey in close proximity to New York City, Binkowski got an early start on her life as a musician.  “I used to jump off the piano bench as a little kid,” she says, thinking back all the way to the beginning, to her earliest musical memories. “I remember having a nightmare and going to hide under the piano, thinking, ‘It’s safe here.’ "

After taking piano lessons from her mother starting at age three, she continued in the prep division of the Manhattan School of Music, taking Saturday lessons in piano and performing in the children’s chorus. Which was all well and good. “But,” she says, “for some reason I had this obsession with the flute.”

Her parents, supportive of her musical tendencies, at first tried to discourage her flute fixation, knowing it would be difficult to find a teacher who would work with an eight year old. When they asked her why she was so interested in the flute, she answered, “It’s long, and I’m long, too.”

Undeterred by attempts to steer her interests her elsewhere, she cultivated her passion for the flute throughout her early education, in which she received a solid grounding in traditional repertoire. But her eyes and ears remained open to new avenues for expression.

“I don’t think of myself as a stereotypical flutist,” she says, admitting to having “an iconoclastic side.” At Eastman, she gravitated toward Ossia, a student organization devoted to exploring alternatives for the performance of new music. Later, at the Boston College Tanglewood Institute, she roomed with a young composer named Abby Aresty, whose love of strange effects, multiphonics, and unusual techniques further pushed her musical understanding. “It was super challenging, and I dove into it,” she says of the new techniques she embraced. “I said ‘Yes’ to everything.”

Her friendship with Aresty (a recent graduate of the UW’s Composition program) eventually led Binkowski to Seattle, where she performed on a graduate degree recital presented by her friend and decided to stay.

“I love New York, but everything’s been done 500 times over,” she says. “Here you can really get involved at the ground level community-building with new music. I really like that.”

If it were up to her, all of her endeavors would be in the realm of music. But though she spends long hours in rehearsal for various performances and working with undergraduates in the flute program, she has still found it necessary to take on additional part-time jobs unrelated to music to supplement the stipend she receives from the School of Music for her graduate teaching assistantship. Support from the Boeing Endowed Fellowship for Excellence in Music and the Brechemin Scholarship, however, has helped immensely.

“As a graduate student in the arts, unless you are independently wealthy, which few of us are, you do need the support of generous individuals,” she says. “Otherwise you can’t go to school at all, or you have to work even more jobs. It’s hard to do everything at once, so that support is definitely key.”

It may not be possible to do everything at once, but she manages to do quite a lot. Her latest musical developments are all of a piece with the themes of her life to date—a life in which music has always been in the forefront, always a safe haven. By all appearances, that isn’t about to change.