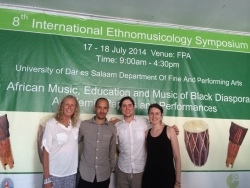 Summer journeys for ten UW-associated faculty, graduate students, and significant others marked new signposts on a Tanzanian adventure that began in Dar es Salaam some six years ago.

UW Ethnomusicology head Patricia Campbell traveled to Tanzania this past summer with a contingent including affiliate assistant professor of music Christopher Roberts and PhD students of ethnomusicology David Aarons, Joe Kinzer, and Jocelyn Moon. While there, they presented research papers, provided children with lessons in English-language folk songs, joined in workshops with community musicians, and sang, danced, and played at the 7th Annual Wagogo Festival of Music in Chamwino village.

The trip marked the latest developments in the ever-deepening academic connections between musicians and scholars in Tanzania and Seattle that were first forged back in 2008 following a visit by UW music professor emerita Barbara Lundquist to alumnus Mitchel Strumpf, then a professor of music at the University of Dar es Salaam.

“Lundquist’s long-term commitment to the music and musicians of sub-Saharan African cultures is legion,” Campbell says, “and was regularly featured in her class lectures in the 1970s and 80s.” Neither could have known at that time that their reunion would ignite an exchange between the UW School of Music and Tanzanian musicians, scholars, and educators that would give growth to new avenues of field research and learning. But a few years later, ethnomusicologists and academicians at the UW are gaining first-hand knowledge of the Wagogo musical tradition and producing scholarly studies documenting their findings.

“Over the past five years, seven PhD students of music have now experienced Wagogo music live in the village ensembles of Tanzania,” says Campbell. “They learn-by-doing “ngoma,” that process in the musical culture of the Wagogo that is inclusive of singing, dancing, playing, and which encompasses story-telling and dramatic displays as well.”

Since then, a number of exchanges have enabled deeper investigation and documentation of this cultural tradition. This past July, the Tanzanian attaché presented scholarly papers at the 8th annual East African Ethnomusicology symposium in Dar es Salaam, where they were reunited with Kedmon Mapana, their former teacher and colleague. In a scattering of villages in central Tanzania, they informally documented the traditions of Wagogo musicians and dancers. Several participated in the first annual International Music Education Workshop at the Dhow Countries Music Academy in Zanzibar.

“Like many other fine universities, the UW School of Music can boast of its first-rate student pianists, violinists, flautists, guitarists and singers,” Campbell says. “Uniquely, Wagogo music is also very much alive at the UW, and draws students body and soul into the making of this expressive musical practice.”

The scholars’ activities in Tanzania last summer were made possible, in part, with support from the School of Music and the UW Graduate School.