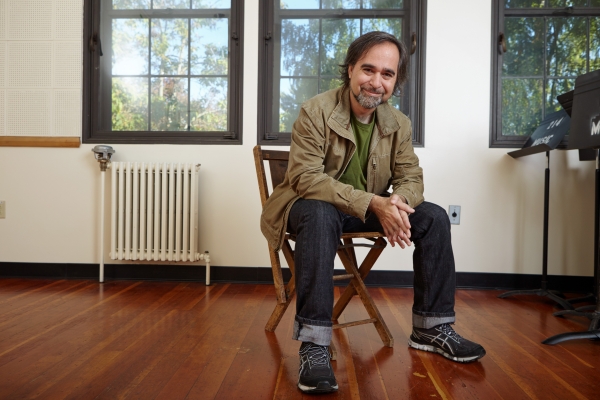 A break between quarters is a brief space of creative opportunity for composer Juan Pampin, associate professor of music at the University of Washington and director of the UW’s Center for Digital Arts and  Experimental Media (DXARTS). As the UW’s students and faculty scattered in December at the end of finals week, Pampin was taking a break from his administrative duties to consider new creative projects and to regroup following a year of prolific output.

If the demands of his work at a research university present constraints and limits, they also afford him a freedom to focus research on areas of genuine interest. Pampin is selective when accepting commissions, seeking out projects that allow him to explore his often very specific research interests.

His background as a classically trained composer aside—he holds master‘s and doctoral degrees in composition from Conservatoire National Supérieur de Musique de Lyon, France and Stanford University, respectively—Pampin‘s work encompasses, among other disciplines, aspects of music, digital art, mathematics, architecture, computer science, engineering, and recently, neuroscience. Over the past year  he has been immersed in several ongoing projects devoted to exploring neurological aspects of human  cognition

Pampin’s involvement with Deuel in a historic art-meets-technology project this past October offered furtherexplorations in a fascinating realm of creative experimentation. “The result of this collaboration is Hemispheres, a 45-minute 3D sound performance sculpted by brain activity,“ he says of the duo’s  involvement in 9e2 Seattle, a festival of art, science and technology commemorating the 50th anniversary of  9 Evenings: Theatre and Engineering, a 1966 project in New York City that brought together artists, scientists and engineers from Bell Telephone Laboratories in performances based on the newest  technologies of the time.

For Pampin, discovery often resides in the unexpected, the surprises that result when all the elements of a piece—from performer to instrumentation to the performance space itself—combine in the process of creation and performance. Pampin’s compositions pay close attention to the space in which they are performed, to the point that the room itself, he says, can almost be like a member of the performance group.

Though each presentation or performance of a work is unique and frequently incorporates a degree of improvisation, an immense amount of preparation is required to help ensure successful results.

Pampin incorporates into his sound projects elements of control, in which a fixed framework may be combined with an open framework to allow surprising developments. He put this approach to good use  recently in the premiere performance of “Indigo Mist, Phase II,” a piece created in collaboration with Richard Karpen, the Cuong Vu Trio (Cuong Vu, Ted Poor, Stomu Takeishi,) and Vietnamese master musician Nguyên Thanh Thŭy (Six Tones Ensemble). For this piece, presented in November on the UW’s Music of Today concert series, he developed a feedback system that could only be activated by the sound of the of the acoustic instruments. “My instrument uses a chaotic algorithm that can produce subtle timbral alterations of the instruments or generate complex and abrasive sound textures from their sound,” he says.  “Playing such instruments comes with a huge responsibility, as I’m controlling many parameters in real time to sculpt the sound, and the system can get wild and explode loudly or simply get silent; it almost has a life of its own! My role as a performer and composer is to make music within this uncertain framework; that’s the challenge.“

Beyond the university, Pampin’s work has been presented in locations ranging from bathrooms to urban public spaces, at notable venues and festivals around the world, and performed by internationally renowned  soloists and ensembles. One of those, Les Percussions de Strasbourg, recently included his work On  Space for percussion sextet and 3D electronic sounds in its 50th anniversary historical edition box.

Meanwhile, in the laboratories of Raitt Hall, the boundaries of existing disciplines are no impediment to Pampin and his collaborators: if the technology doesn’t exist to achieve a desired result, it can be created. A new ultrasound project, AcousticScan, developed with DXARTS research associate Mike McCrea, deploys robotic speakers to direct highly focused beams of sound onto architectural elements of buildings or physical landscapes, to interact with architectural features, bounce off listeners, or gather in the sonic shadows behind physical obstacles. Pampin and McCrea’s work resulted in a patent for the technology they developed, and when the parts needed to assemble pieces of the robotic speakers were not available, they built what they needed with 3D digital printing. The idea is not to replicate previous successful results, but to reveal new ones.

After all, Pampin says, “Research shouldn’t be about making products of standard quality. Research should be about discoveries. In each piece, I follow a methodological artistic path that allows for surprises, to stumble upon things I hadn’t discovered before.”

Learn more about Juan Pampin and his research activities at dxarts.washington.edu/people/juan-pampin.