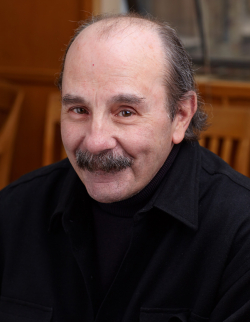 Barry Lieberman, a 30-year member of the School of Music faculty, announces his retirement as the UW’s double bass instructor, effective in June 2020.

A former principal bassist of the Winnepeg Symphony, Lieberman served for 17 years as Associate Principal Bassist of the Los Angeles Philharmonic before relocating to Seattle in the early 1990s. At the School of Music, where he is an Artist-In-Residence in the strings program, he has hosted for more than 25 years the School of Music’s popular Barry Lieberman and Friends series, featuring performances and master classes by world-famous bassists, including Joel Quarrington, Thomas Martin, and Gary Karr, whom Mr. Lieberman interviewed at length for a series on the Countrabass Conversations channel on YouTube.  Extending his reach as an educator, Lieberman’s own YouTube channel including dozens of orchestral tutorials has gained more than a half million views.

Mr. Lieberman’s spouse, the violinist Maria Larionoff (former Concertmaster of the Seattle Symphony), has also been Lieberman’s artistic collaborator in the American String Project, an acclaimed conductorless chamber ensemble that staged ten years of concert seasons at Benaroya Hall and elsewhere in the Seattle area and for which Mr. Lieberman arranged more than 100 string quartets and quintets. More recently, Ms. Larionoff was appointed Artistic Director of the String Orchestra of the Rockies, based in Missoula, Montana.

Barry Lieberman took a moment from his teaching duties recently to answer a few questions about his time at the UW and beyond.

What will you miss most about teaching at the UW?

After teaching since 1976, both privately in LA and for 30 years at the UW, the thing I will miss most about teaching at the UW will be the pleasure I get from seeing new students every year and having the opportunity to guide them, both musically and personally, in what is often their most formative years. Not all of them go on to musical careers, but they all remain in contact with me as friends. Maria and I never had children, but I feel as though I have had hundreds as a result of my UW work. My favorite chide to those who are being difficult has always been, "You are the reason I never had children." Of course this was said in jest!

What is your proudest UW achievement?
Several of my students have gone on to positions in major orchestras.  Some are currently in programs in major conservatories such as Curtis and Juilliard.  Many are teachers in the public schools and quite a few are professional jazz players.  Many are married with families living productive and happy lives.  It is very gratifying to see all of them grow into adults and continue to play the double bass.

What advice would you offer your students or other aspiring double-bass players?

Some words of advice would be to continue to love playing and progressing.  If playing ever becomes a "chore" you should put the instrument down and come back to it later in your life.  Being a musician is one of the few professions where one can truly say they love what they do. All of my students know they can come back to me for help no matter where they are in their lives.