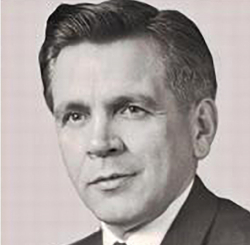 Born in Kent, Washington to Fanny and Matti Jussila, Clyde Jussila lived much of his life in Washington state. As a young man he grew up in Issaquah, where he graduated from Issaquah High School in 1938. Clyde earned his BA from the UW and his MFA Degree in music from Kansas State University. In 1942, Clyde enlisted in the U.S. Army, serving in the Third Infantry during World War II. He fought in Africa, Sicily, and survived Anzio Beach, Italy. He went on to play in the U.S. Army Band.

After the war, Clyde taught music at Kansas State University and the UW. Clyde enjoyed teaching musicians how to be good teachers. He always kept students' hearts at the center of his teaching. He wanted his students to love what they did and pass that love of music on to others. Clyde taught many of the Seattle-area music teachers over the years and is a member of the Washington Music Educators' Hall of Fame.

Clyde played violin, viola, trombone and bassoon for many different orchestras in the area, including the UW Symphony Orchestra, the Seattle Symphony, and Cascade Symphony Orchestra. Clyde evoked joy and responsibility in all he did. He loved learning new things, especially the latest in computer technology and new gadgets. His other pastimes included golf, flying, composing, and arranging music.

More than anything, Clyde wanted those around him to be happy. Clyde's relentless wit brought joy to all. Through the years, he lovingly supported and cared for his mother, sister Darlene (predeceased), and her children. He found the love of his life, Liisa Vasama Ingalls, also of Finnish heritage, and they married in 1997. With Liisa, Clyde travelled and lived in new places. He enjoyed being a part of Liisa's children's lives and having an extended family. Clyde gracefully participated in a century-long life, which included the family draft horse, Model T, airplanes, using the internet, and owning a hybrid.

He is survived by his wife Liisa, nephew Peter (Angelia), niece Karen (Russ), Liisa's children (Karen, Johanna, and David), her sister Sirkku, grandchildren, and other relatives. Services to be announced through Curnow Funeral Home in Graham, Washington. In lieu of flowers, please make donations in memory of Clyde to the UW Music Department.

This obituary is from the July 19, 2020 issue of the Seattle Times.

Former student Greg Dziekonski of Seattle contacted the School of Music last summer to share his memories of former School of Music faculty member Clyde Jussila, who died on July 9. 2020.

Clyde Jussila was a great guy with a fantastic sense of humor.  I don't think I ever saw him get mad. It's impossible to measure how many teachers he prepared to go out into the school system. I always found it amazing that he could play so many instruments so well. As much as I tried, I never figured out who taught him how to do any of this. He must have had some kind of instinctive ability, like Heifetz or Paganini. So many people from his generation who became professors of music at the university level came from obscure musical backgrounds. I think that these people tried to give future students all the advantages they did not have in terms of teaching, ensembles, etc., and were quite successful in doing so for many years. Vilem Sokol in many ways fit this mold (although he had a shorter temper). I learned so much from him both as his private student and from playing in the Seattle Youth Symphony.

During Little and Junior Symphony rehearsals, Clyde used to single me out frequently, stopping the orchestra and saying something like:  "Mr. Dziekonski!  Is that the fingering you have in your part?" and other commentary, although this was warmhearted and I never held it against him. I had an odd way of getting back at him during a Junior Symphony rehearsal on one occasion, although I only realized this much later. We were playing "Polka and Fugue from Schwanda" by Jaromir Weinberger, a piece I have not played since but can still recall very vividly.   He made a facetious comment during the polka stating: "Kinda bounce in your chair when you play this."  Well, I'm the only one who followed his directions verbatim. I starting bouncing my butt in my chair while playing it. I was 11 years old, and he probably thought it was cute. He did not single me out at that rehearsal anymore, but I sure as hell kept him from keeping a straight face.
—Greg Dziekonski
News Category:
Information for
Prospective
Students
Information for
Current
Students