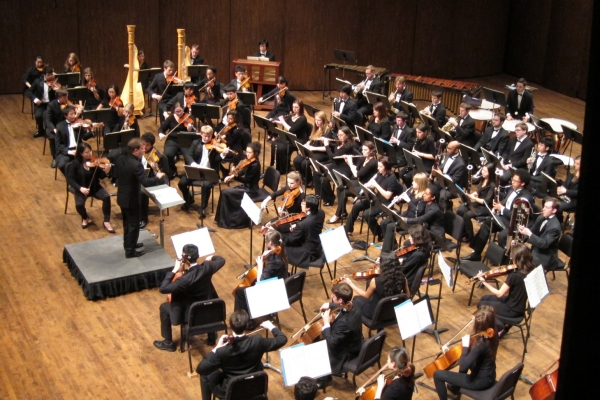 Ludovic Morlot
The French conductor Ludovic Morlot is Music Director of the Seattle Symphony. His first two seasons in this position have been received with huge enthusiasm by musicians and audience alike; who have appreciated not only the artistic excellence of the performances but his innovative programming and focus on collaborating with the local community. During the 2013/14 season he will conduct a gala concert with Lang Lang and works by many different composers including Boulez, Dusapin, Dvorak, Mahler, Verdi and full programmes of Ravel and Stravinsky. The orchestra will also perform at Carnegie Hall in New York, with a programme of works by John Luther Adams, Varese and Debussy.

Ludovic Morlot is also Chief Conductor of La Monnaie. This season he will conduct new productions of La Clemenza di Tito and Jenufa as well as concert performances in both Brussels and Aix-en-Provence, including Britten’s War Requiem and Messiaen’s Trois petites liturgies. During his first season as Chief Conductor, he conducted productions of Pelléas et Mélisande and Cosi fan tutteas well as Alfred Bruneau’s Requiem.

During the 2013/14 season Ludovic will return to the Orchestre National de France and the Rundfunk-Sinfonieorchester Berlin. He will also close the BBC Symphony Orchestra’s subscription season with a performance in the Barbican of Poulenc’s Les Mamelles de Tiresias and Fauré’s Requiem. Last season, Ludovic made his debut conducting at the Saito Kinen Festival in Japan and returned to the Royal Concertgebouw and Los Angeles Philharmonic Orchestras.

Ludovic Morlot has regular relationships with the New York Philharmonic and Chicago Symphony Orchestras and has recently conducted the symphony orchestras in Philadelphia, Cleveland and Pittsburgh. He also has a strong connection with the Boston Symphony Orchestra whom he conducts regularly in Boston and Tanglewood and recently also on a tour to the west coast of America. This relationship started in 2001 when he was the Seiji Ozawa Fellowship Conductor at the Tanglewood Music Center and subsequently appointed assistant conductor for the orchestra and their Music Director James Levine (2004-07).

Joël-François Durand
Joël-François Durand is Professor of Music at the University of Washington, where he has taught composition, analysis, and theory since 1991. He has been Associate Director of the UW School of Music since 2002 and serves as Chair of the Composition Program.

Durand studied mathematics, music education, and piano in Paris, then composition with Brian Ferneyhough in Freiburg im Breisgau, Germany (1981-84). During that time he also attended masterclasses with György Ligeti, Luciano Berio and Luigi Nono. In 1982 Durand was awarded a scholarship from the DAAD (German Academic Exchange), and a Darmstadt Institute Scholarship for his String Trio. He received the "Kranichsteiner Musikpreis" from the Darmstadt Internationalen Ferienkurse in 1990.

He left Europe in 1984 to pursue a Ph.D. in Composition (awarded in 1988) at the University of New York, Stony Brook (USA), where he studied with Bülent Arel. He also studied electronic music with Daria Semegen.

Chair of the keyboard program at the University of Washington, celebrated American pianist Robin McCabe has enthralled audiences across the United States, Europe, Canada, South America, and the Far East in an international performance career spanning several decades. The New York Times observed, “What Ms. McCabe has that raises her playing to such a special level is a strong lyric instinct and confidence in its ability to reach and touch the listener.” The Tokyo Press declared her a “pianistic powerhouse,” and Richard Dyer, the eminent critic of the Boston Globe noted,  ‘Her brilliant, natural piano playing shows as much independence of mind as of fingers.”

A native of Puyallup, McCabe earned her bachelor of music degree summa cum laude at the University of Washington School of Music, where she studied with Béla Siki, and her master’s and doctorate degrees at the Juilliard School of Music, where she studied with Rudolf Firkusny. She joined the Juilliard faculty in 1978 then returned to the UW in 1987 to accept a position on the piano faculty. In 1994 McCabe was appointed Director of the School of Music, a position she held until 2009. She has held a Ruth Sutton Waters Professorship and a Donald Petersen Professorship in the School of Music. In addition, McCabe is a dedicated arts ambassador and advocate for arts audience development, frequently addressing arts organizations across the country. With colleague Craig Sheppard, she launched the highly successful Seattle Piano Institute, an intense summer “immersion experience” for gifted and aspiring classical pianists.

McCabe performs regularly throughout the United States, and in 2011 made her first visit to South Korea. She appears often as an invited jurist for international piano competitions, most recently in New Orleans, San Antonio, and Vancouver, Canada.  In June of 2016 she will serve on the jury for the international  Gina Bachauer Competition for piano.

Craig Sheppard
A native of Philadelphia and a graduate of both the Curtis Institute of Music and the Juilliard School, Professor of Piano Craig Sheppardcame to the University of Washington in 1993 after living twenty years in London.  Winning the Silver Medal at the 1972 Leeds International Pianoforte Competition in the UK, he moved there shortly thereafter, performing subsequently with all the major British orchestras, many on the European continent, a number in this country - including Chicago, Boston, Philadelphia, San Francisco and Seattle - and appearing with many leading conductors of the day.  While in London, he taught at the Yehudi Menuhin School and the Guildhall School of Music and Drama, and gave numerous master classes at both Oxford and Cambridge universities.

In recent years, in addition to a highly acclaimed recital at the Berlin Philharmonic, Sheppard has traveled frequently to the Far East, India, Australia and New Zealand to teach and perform.  In late March, he visits China for the third time to perform the 24 Preludes and Fugues of Shostakovich at the Shanghai Conservatory and the Forbidden City Concert Hall in Beijing, culminating in a performance and recording of the Shostakovich in Seattle’s Meany Theater on April 25th.

Sheppard has collaborated with many of the most celebrated instrumentalists and singers of the day, and his CDs have garnered excellent reviews consistently from such diverse publications as Gramophone, International Record Review and Fanfare.  His students have won prizes in major competitions and hold positions in universities and conservatories throughout this country, Europe and Asia.  With colleague Robin McCabe, he will host the fifth annual Seattle Piano Institute this July at the School of Music.  For more information, see www.craigsheppard.net  and http://blogs.uw.edu/seapiano/.