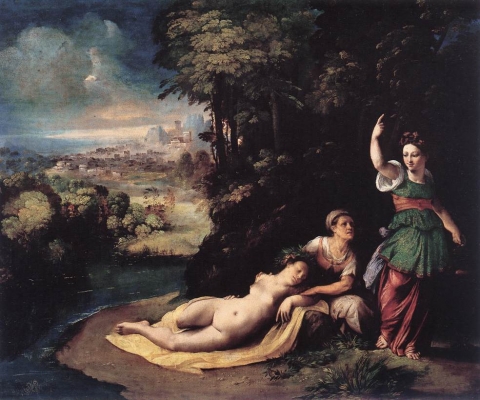 Calisto was the tenth and penultimate collaboration between the librettist Giovanni Faustini and the composer Francesco Cavalli. That group of works, all produced in Venice over the decade from 1641 to 1651 were not only the most famous and celebrated musical-dramatic works of their time, but together they virtually defined the new genre of public opera.

The idea of opera itself was engendered in the musical and literary circles of Florence in the 1570s and 80s leading to the first experiments in court opera in Florence, Mantua and Rome. But the birth of public opera, the genre that has had an uninterrupted life from then until now, has a precise place and date – Venice in 1637.

Various composers and librettists contributed to the very earliest opera productions for Venice at Carnival time. The most famous composer to do so, then and now, was Claudio Monteverdi, who as a world-famous composer nearing the end of his long life, leant not only fame but also gravitas to the new enterprise.

Yet it is the combination of Faustini and Cavalli which went on to define all of the most important ingredients of the genre,  thereby setting their stamp on the future of opera. We tend to think of opera now in terms of its composer, but this has not always been the case. It could be argued that for a later generation (the early 18th century) it was the librettist Metastasio, far more than the hundreds of composers who set his libretti, who was the leading creator of opera in his time.

But for the time of the creation of Calisto (1651), Ellen Rosand (our leading scholar on the Venetian Opera who has quite literally “written the book” about it) expresses it as “a moment of equilibrium…a perfectly adjusted meeting of music and drama”. (1.) For this reason, it is valuable to think of this work as “Cavalli and Faustini’s Calisto” much as we think of Mozart and Da Ponte’s Don Giovanni, or indeed Gilbert and Sullivan’s Mikado.

The subject matter and aesthetic setting of the earliest court operas was rather narrow: derived from mythology and set in an idealized Arcadia where the idea that nymphs and shepherds sang to each other rather than speaking seemed less of a strain on verisimilitude than if real or historical people were to do the same. Once opera emerged onto the public stage in Venice, a wider range of dramatic material was involved, adding historical subjects such as the Nero and Poppea of Monteverdi’s last opera, as well as the knights and ladies of medieval romance to the mythological themes, and in the case of Faustini in particular, pure “invention”, owing more to the theatrical form of the commedia dell’arte than to any literary tradition.

Even more importantly, the fact that opera was now designed to appeal to a wide social range (anyone who could afford a ticket as opposed to the “by invitation only” nature of court opera) meant that elements of the comic, the spectacular and even the grotesque were needed to assure a wide-ranging appeal. When Faustini came to create the libretto for Calisto he was nearing the end of his genre-defining collaboration with Cavalli and also nearing the end of his life, dying the same year at the age of 36. He approached the mythological subject of Jove’s encounter with Diana’s acolyte Calisto, and wove it together with the tale of Diana’s dalliance with Endimione, with a sense of freedom and artistic license that would have shocked his predecessors  - and may have succeeded in shocking some of his contemporaries.

It seems to me that he set out to fashion a show that a modern promoter might describe as “ a sexy romp” – with all the tools that he and Cavalli had developed in their previous works. Sexuality and sensuality pervade every corner of the libretto, whether in the elevated and poetic tone of Endimione’s pining for his moon-goddess, or at the lower end, the coarse humor of the little goat-boy Satirino and Linfea, the abrasive object of his lust. And at the center of everything, Jove’s use of trickery, disguising himself as Calisto’s chaste leader, Diana, in order to have his wicked way with her - allowing the unprecedented (as far as I know) spectacle of lesbian sexual encounter onstage.

Cavalli, of course, had his own wide range of musical responses to all of these situations and styles. The furthest poles can be represented on the one hand by Endimione’s paean to the Moon (Diana), the sublime Lucidissima face – one of the most beautiful arias of the early opera (or for that matter, any opera) which signals its deep lyricism by the inclusion of violins in the texture. (At this period, the violins are mostly restricted to the mood-setting function of preludes and postludes – usually called ritornelli – and are only rarely woven together with voices.)

And at the lower end, characters like Satirino and Linfea, but also Pane and his sidekick Silvano, speak (sing) almost entirely in “sdruccioli”, the verse form that ends the rhyming lines with the long-short-short that is reserved for rustic and grotesque characters, and lends itself to sharp and jagged rhythms which reinforce the ungainly impression. The supple musical language that Cavalli developed in parallel with Monteverdi allows for a seamless continuity between what would later be called recitative, arioso and aria – but here it is up to the performer to discover exactly where the border lies between speech and song and how this effects pacing, tone of voice and rhythmic freedom or regularity. In the particular case of Calisto, beyond that scope from speech to song, it is also finding at each moment the exact location on the spectrum from innocence to sensuality to frank sexuality that must be discovered and expressed.

Musically the thing that perhaps separates the early Venetian opera most significantly, even surprisingly, from later opera, is the tiny dimensions of the orchestra. Two violins, and a few instruments of the continuo (harpsichords, lutes, and bowed basses) were the typical Venetian “pit band”. It might be tempting to think of this as the “minimum” with an undefined “maximum” – but in the particular case of Calisto we know this to be the exact case, just as we happen to know that the cast consisted of exactly 10 singers. (2.) It is unusual to have this much documentary evidence about an original production from this period, and we are lucky that it allows us to guide the definition and selection of both the band and the cast. In two cases however, it is not feasible to follow the historical casting precedent as Satirino and Linfea were originally cast as “boys” and Pane was most likely an alto castrato. In the other cases, the combination of tessitura and name allowed us to cast the voice type and gender as in the original cast.