Russian Music of the 1960's: Brendan Kinsella and Luke Fitzpatrick 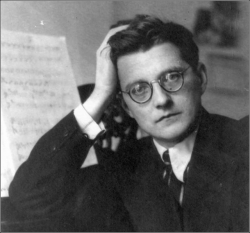 Dr. Brendan Kinsella joins UW Artist in Residence Luke Fitzpatrick in a program of 1960s-era violin sonatas by Russian composers. Showcasing elements of serialism and quotations from the past, the musicians perform the Violin Sonatas of Edison Denisov and Dmitri Shostakovich and Sonata No. 2 (quasi una Sonata) by Alfred Schnittke in this program of  works grappling with a changing musical landscape in Russia during this time period.

NOTE:  Due to expected traffic and congestion in the U-District on Friday, January 20, patrons are encourage to arrive early. Guests attending events at Meany Hall and the Jones Playhouse should show their ticket at the parking gate for access to the Central Parking Garage.

Luke Fitzpatrick is a violinist, composer and improvisor.  He is a founding member and artistic director of Inverted Space, a Seattle-based new music collective.  Recent solo performances include Earle Brown’s Centering with Inverted Space, Alfred Schnittke’s Moz-Art with the University of Washington Chamber Orchestra and Brian Ferneyhough’s Intermedio alla ciaccona in the presence of the composer.  His February 2016 performance of Steve Reich’s Violin Phase was performed with a live electronics system developed by Marcin Pączkowski.  Additionally, he has performed with Deltron 3030, The Penderecki String Quartet, inauthentica, The Parnassus Project, The Moth, The Argento Chamber Ensemble and the California EAR Unit.  His world premiere recording of Vera Ivanova's Quiet Light for solo violin was released on Ablaze Records in 2011.  Luke holds degrees from The University of Washington (DMA), California Institute of the Arts (MFA) and the University of Missouri-Kansas City (BM).  His principal teachers include Benny Kim, Mark Menzies, Lorenz Gamma and Ron Patterson.  He is currently Artist-in-Residence at the University of Washington.

Described as a “sensitive musician with an ear for color” by the Cincinnati Enquirer, pianist Brendan Kinsella’s recent concert engagements have taken him to New York, Chicago, Los Angeles, San Francisco, Houston, Dallas, Holland, Italy, and other cities throughout the United States, Europe, and Asia.

He earned his Bachelor (with honors) and Master of Music degrees at the University of Cincinnati College-Conservatory of Music as a pupil of Frank Weinstock (with additional coaching from James Tocco and Kenneth Griffiths) and in 2008 received his Doctor of Musical Arts degree from the University of Missouri-Kansas City as a student of Robert Weirich.  In master classes, he has performed for artists such as Christopher Elton, Susan Graham, Martin Katz, Ani Kavafian, Anne-Akiko Meyers, Frederic Rzewski, Andre-Michel Schub, Peter Serkin, David Shifrin, Midori, and the Takacs Quartet.  He completed his training as a Solo Piano Fellow at the Music Academy of the West, working under the guidance of Jerome Lowenthal, Professor of Piano at the Juilliard School.  In 2010, he debuted as a soloist in Carnegie Hall’s Weill Recital Hall and was a featured concerto soloist at the prestigious Midwest Clinic in Chicago.

Kinsella has appeared in concerti ranging from Beethoven to Brahms to Barber with the Kentucky Symphony, the Jefferson City Symphony, the CCM Chamber and Concert Orchestras, the UMKC Conservatory Orchestra, and the UMKC Wind Symphony in collaboration with conductors Xian Zhang, Steve Davis, and Robert Olson.  As a collaborative pianist, he has performed both as an orchestral pianist and in duo-recitals with members of the New World Symphony, the Cincinnati Symphony Orchestra, the Cincinnati Chamber Orchestra, the Omaha Symphony, the Dayton Philharmonic, the Kansas City Symphony and Lyric Opera, and in recital with artists such as Benny Kim, Carter Enyeart, Daniel Saenz, and his wife, Shoko.  Since 2010, he has coached and performed as a Guest Artist in Collaborative Piano at the soundSCAPE Composition Festival in Maccagno, Italy.

A dedicated teacher, Kinsella presently serves as Assistant Professor of Piano at the University of Texas-Rio Grande Valley, where he teaches applied piano, chamber music, piano pedagogy, and piano literature.  Members of his select studio of graduate and undergraduate pianists regularly participate in prestigious national and international summer festivals, perform in master classes for distinguished artists (such as Jerome Lowenthal, James Dick, and Adam Wodnicki), present their scholarly research at professional conferences, and gain admittance to prestigious master’s and doctoral programs nationwide.  Before joining the faculty at UTPA, he was as a member of the piano area at Missouri Western State University and held graduate assistantships in piano and collaborative piano at CCM and UMKC.