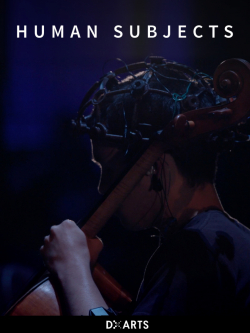 The Department of Digital Arts and Experimental Media presents the premiere of “Human Subjects,” a new film documenting the culminating performance of a years’ long collaboration between composers and research staff from the School of Music, DXARTS, UW neuroscientists, and members of New York-based chamber group JACK Quartet.

The members of the JACK Quartet don portable EEG and wearable muscle neuron sensors in "Human Subjects," the culminating performance of the group’s extended residency at the University of Washington. Over a three-year period from 2016-2019 faculty composers from the School of Music and the Department of Digital Arts and Experimental Media (DXARTS), Juan Pampin and Richard Karpen, the JACK (Austin Wulliman, Chris Otto, John Richards, Jay Campbell) as well as neuroscientists and a team of research staff from DXARTS, explored brain and nervous system sensing methodologies as extensions to master musicians' traditional performance practice. This collaboration was made possible through the UW Creative Fellowships Initiative with funding from the Andrew W. Mellon Foundation.

Human Subjects  was composed through a generative process involving a series of experiments in which the members of the JACK donned EEG headsets and EMG armbands to explore new extended performance techniques based on brain and nervous system sensing. Human Subjects gradually emerged from those experiments; for instance, the first section of the piece is the result of an experiment in which the rhythm of the brain waves of each player was sonified and sent back to the player via earpiece headphones. The JACK were asked to imitate the rhythms of their brain waves, playing clicks on their instruments, trying to match the sonified data as closely as possible. In order to achieve this task, performers required extreme concentration. The closer they come to matching the data, the larger the amplitude of their brain waves and the louder the sound coming out of the speakers. This section deploys different EEG bands (theta, alpha, beta, etc.) to create a complex poly-rhythmic structure. In other sections of the piece, real-time EMG data coming from both arms of each player controls the sound processing of their instruments. This data was used to train neural networks allowing detection of multiple gestures ranging from individual notes played at different rates to trills and tremolos and the creation of a continuum between them. This continuous data space gave the players control of processing algorithms’ reactions to the rate of firing of neurons governing their left and right hands. This strategy is used in a section close to the end of the piece to create a dense harmonic texture, which the players can sculpt by playing different gestures on their instruments, controlling the multiple parameters of a feedback delay network. Many other combinations and mappings of those sensing technologies were used to compose other sections of the piece.

While the title Human Subjects refers to the experimental methodologies that led to the composition, it also puts emphasis on the central role of the human body in the creation and realization of the piece. From that point of view, one can understand not only a mind/body connection or continuum, but one in which the mind is body, in which there is only body. Rather than diminishing the sense of the mystery of how we think and of what we might call spirituality, this point of view—that there is only body, and that the mind is a part of it—makes the entire idea of who, where, why, how, what we are even more deeply astounding and unexplainable. And that is exactly the role of Art and our approach to integrating science and technology into it—to create experiences that put the audience into this “zone.”