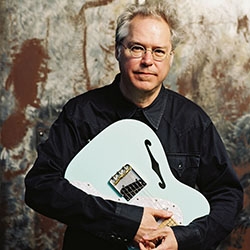 Students from the University of Washington Jazz Studies program build on the success of a dynamic and ever-expanding creative endeavor April 24-27 when the Improvised Music Project presents IMPfest V.

The annual festival, which pairs local up-and-coming avant-garde music visionaries with some of the world’s top performers in a series of spring concerts, has experienced dramatic growth in its short history and has played an important role in igniting Seattle’s expanding new music scene. Past festival highlights have included appearances by renowned artists Bill Frisell, Andrew D’Angelo, Tim Berne, George Garzone, Ralph Alessi, and the Cuong Vu Quartet.

Concerts at the Chapel wrap up on Saturday, April 27 with performances by three Seattle groups featuring past and current Jazz Studies students—King Tears Bat Trip (the vision of Jazz Studies faculty member and alumnus Luke Bergman, guitar), Japanese Guy, and the How Glass is Made Ensemble.

The IMP and IMPfest are organized and run entirely by students from the UW Jazz Studies Program. In late 2011, many of those same students were involved in the launch of Table and Chairs, a Seattle-based record label that serves as an anchor for the same music community that the IMP has helped to develop. In an effort to foster the growth of forward-thinking musicians, IMP students curate monthly showcases at Café Solstice in the University District as well as participate in a weekly jam session called The Racer Sessions at Café Racer, a hub for avant-garde music in the University District.

A complete festival schedule and more details are available at www.improvisedmusicproject.com and at www.music.washington.edu.

Ray Larsen's How Glass is Made Ensemble

This musical kinship with Miles Davis has been cited repeatedly in the music press. The New Yorker notes: "Bill Frisell plays the guitar like Miles Davis played the trumpet: in the hands of such radical thinkers, their instruments simply become different animals. And, like Davis, Frisell loves to have a lot of legroom when he improvises--the space that terrifies others quickens his blood."

Grammy-winning bassist/composer Eric Revis has been one of the most solid and forceful voices in the contemporary jazz scene for over 15 years despite his young age. Eric met Delfeayo Marsalis while volunteering for the Arts Council of San Antonio. Delfeayo strongly suggested that Eric study under his father's program in University of New Orleans. Eric then moved to New Orleans where he has studied under Ellis Marsalis, Harold Battiste, and Victor Goines. Eric made his inevitable move to New York City in 1994, as he became a regular bassist for Ms. Betty Carter. It did not take long for the New York musicians to take a notice in Eric. He had worked regularly with Billy Harper, Louis Hays, Lionel Hampton, Tess Marsalis, Russell Gunn, etc.

In 1997, Eric met Branford Marsalis at a recording session with Russell Gunn. Mr. Marsalis, who was impressed with the young bassist, asked Eric to join him on his recording Bug Shot, along with Kenny Kirkland and Jeff "Tain" Watts. Eric has been one of Branford's most reliable allies since then.

Ted Poor began playing drums in 1984 at the tender age of three. He can’t remember his first attraction to the drums, though his parents place it at a Horace Silver concert in his hometown of Rochester, NY. That concert led to a homemade drum set, which in turn prompted a neighbor to donate his old set to the enthusiastic youngster. Ted continued playing throughout grade school and began studying privately with Rich Thompson in 1993. After briefly entertaining the thought of a career in engineering, Ted enrolled in the Eastman School of Music to study music full time – receiving his Bachelors of Music in 2003. While still at Eastman, Ted met acclaimed guitarist Ben Monder, who was visiting as a guest artist. Monder then appeared on Poor’s debut quartet record "All Around" (Trier 2003) and in the fall of 2003 Poor joined Monder’s band and moved to New York City.

Poor has since established himself as a unique and important voice in the NY jazz/improvised music community. Jazz Review writes, “Ted has an uncanny ability to shape the music and a refreshingly unique, organic approach to playing the drums.” This unique approach has caught the ears of many of jazz’s most established musicians and placed him amongst those drummers most in demand. In 2003 Poor began touring internationally with Grammy award winning trumpeter Cuong Vu. Together with bassist Stomu Takeishi, the trio collaborated with Bill Frisell to record "It’s Mostly Residual" (Artist Share 2004) and with Chris Speed to record "Vu-Tet" (Artist Share 2007). Ted has additionally performed with a broad spectrum of musicians including Kurt Rosenwinkel, Chris Potter, Aaron Parks, Maria Schneider, Scott Colley, George Garzone, Ralph Alessi, Marc Ducret, David Fiuczynski, David Berkman, Nils Wogram, Donny Mccaslin and John McNiel. As a guest soloist and educator, Poor has held residencies at, among others, the Eastman School of Music, Berklee College of Music, Cal Arts, Lawrence University, the HR Big Band of Frankfurt, Colorado University at Denver and the University of Washington.

Most recently, Ted has joined with cohorts Loren Stillman, Gary Versace and Nate Radley to create Bad Touch. In a musical age of predominantly solo careers, Bad Touch has set out to nurture their identity as a collective. With a shared goal of developing improvised music, these likeminded musicians draw on a wide spectrum of jazz improvisational techniques within original compositions. Bad Touch believes that mutual friendship and commitment yield the most fulfilling musical adventures and aims for their work to reflect this philosophy. "Like A Magic Kiss" (Bad Touch Music, 2008) is a concise and potent example of their shared sense of direction.

As a youngster, Cuong's intense dedication and love for music led him to a full scholarship at the New England Conservatory of Music where he received his Bachelor of Music in Jazz studies with a distinction in performance. Transitioning from his studies in Boston, he moved to New York in 1994 and began his career actively leading various groups while touring extensively throughout the world. As a leader, Cuong has released five recordings, each making critics’ lists of the 10 best recordings of their respective years. Each record displays how he has carved out a distinctive sonic territory on the trumpet, blurring all stylistic borders while developing his own compositional aesthetic.

A favorite among the emerging bands of the Northwest DIY scene, King Tears Bat Trip is the vision of Seattle bassist, guitarist, and composer Luke Bergman.  KTBT can be a ferocious, power-violent beast, but their catchy song forms and hypnotizing beats make this music extremely approachable. The folksy melodies seem as much like Haitian Vodou music as they do an Albert Ayler spirit song. Barking saxophone improvisations shout over Bergman’s washed-out, metallic guitar lines, and twangy, rolling percussion instruments sound in the radius. The band’s tightly-woven rhythmic patterns and careful control of pacing sound both raw and fully assured.

Sequoia Ensemble was formed in the Spring of 2011 as a part of the curatorship by Levi Gillis at the Racer Sessions. Drawing on inspiration from natural landscapes, this collective of Seattle musicians captures an earthy and organic sound. Fusing melancholy, poignant melodies with spirited improvisation, Sequoia Ensemble achieves a unique and layered collage of texture.

How Glass is Made

The vision of trumpeter Ray Larsen, How Glass is Made is a continuous piece of music in six sections for a group of seven improvising musicians. It is between 40-50 minutes in length. Instruments include saxophones, clarinet, bass clarinet, trumpet, cello, guitar, piano, bass, drums. The piece presents the listener with a mixture of dense composition, hypnotic pulse, exploratory improvisation and spacious polyphony.