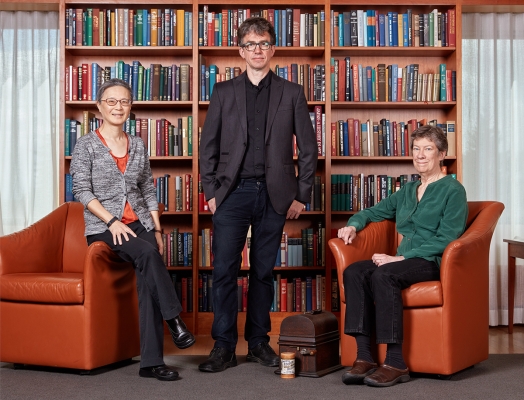 When longtime UW Ethnomusicology Archivist Laurel Sercombe retired from the UW last June after more than 30 years as archivist, many wondered how the archives would change in her absence or if her high standards could possibly be met by any successor. Now, nearly a year later, several truths are evident: One might leave but not really leave; it’s hard to say goodbye; and: If one is diligent, one might be able to help guide the direction of change toward the best possible outcome.

To that end, a passing of the baton—or in this case, the Edison Cylinder—is under way at the University of Washington, where an agreement between the School of Music and UW Libraries takes effect July 1 transferring curatorship of the UW’s internationally renowned Ethnomusicology Archives from the School of Music to UW Libraries.

The move represents a major undertaking many months in the planning and a commitment on the part of the UW to preserve and maintain for future generations the renowned collection of artifacts, field recordings, and research.

Under the agreement, announced to faculty this spring by School of Music Director Richard Karpen and Head of the Music Library Judy Tsou, the Archives will remain physically located in the Music Building but be absorbed into the collections of the Music Library, with John Vallier, Head of Media in the UW Libraries, serving as Ethnomusicology Curator.  Vallier, previously Ethnomusicology Archivist at the University of California Los Angeles, is a sound, video, and film archivist and affiliate faculty member in the Ethno program who worked closely with Sercombe on past archiving projects and team-taught classes in the department. In addition to Vallier’s appointment through UW Libraries, the School of Music, in consultation with the Libraries, will appoint annually a nine-month research assistant dedicated to the archives, which the public may access via the Music Library’s Listening Center.

“The transition has already begun,” Tsou said recently. “We have been working with Laurel—who hasn’t actually left—to hand over the archives to John.” In the interim, Ethnomusicology graduate student Joe Kinzer has been filling in this academic year as the School’s archivist, with some oversight from Sercombe and Vallier, and Vallier has begun to ease into his new role.

“This agreement represents a really long-term commitment by the UW to preserve the archives,” School of Music Director Richard Karpen said when announcing the agreement to faculty this spring. “It feels like the right thing to do, and Laurel more than approves of this herself, and that was important to us.”

Still more big changes are in store in the coming year: Tsou herself exits the UW in September, retiring after seventeen years as UW’s Head of Music Library. Final candidates, who visit campus for interviews later this month, face a daunting record of achievements. In her tenure, Tsou has been instrumental in securing numerous grants and resources, improving the study spaces, enhancing collections, and helping the library stay abreast of technological advances in the preservation of its printed and audio holdings. Her leadership in national organizations includes appointments on the National Recording Preservation Board (NRPB) of the Library of Congress, service as president of the US-Branch of the International Association of Music Libraries, Archives and Documentation Centres (IAML-US), and for the Society for American Music, which recently honored her with the Distinguished Service Citation for her exemplary service to the Society and for her scholarly contributions in the field of American Music.

One might wonder how the Music Library will change in Tsou’s absence or if her high standards can possibly be met by any successor, but if recent events are any indication, a smooth transition is imminent.