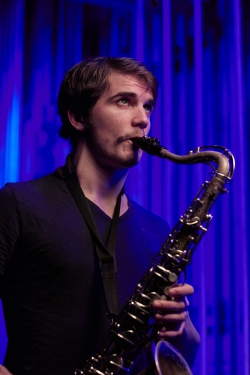 Jazz Studies major Brendan McGovern has been named the UW College of Arts and Sciences Dean's Medalist in the Arts.  McGovern, who recently graduated from the UW with double degrees in Music and History, is one of four graduating seniors to be awarded the dean's medal, the highest honor for graduating seniors in the College. On honoree from each of the College's four divisions--arts, humanities, social sciences, and natural sciences--receives the award annually, with selections based on students' grade point average and faculty recommendations.

While at the School of Music, McGovern performed in numerous combos and ensembles and was engaged in campus and off-campus performances and activities organized by the student-run Improvised Music Project (IMP). This past May, he was a featured musician performing with guitarist Bill Frisell during the IMP's annual festival, IMPFest.

“Brendan is the kind of student one dreams of working with,” wrote Jazz Studies faculty member Ted Poor in his recommendation letter supporting McGovern's award nomination. “He is curious and completely invested in his studies, and always quick to provide encouragement to younger, less experienced players.”

McGovern combined his interests in music and history when preparing his senior thesis in the History department, researching jazz education in Seattle from the 1960s through 1980s and the impact of racism and class privilege.  “His research topic and method — conducting oral history interviews with prominent figures in Seattle’s jazz education community — required him to engage in often sensitive conversations about racism and class privilege,” wrote Lynn Thomas, professor of history, in her letter of recommendation. “He handled those conversations with great skill and humility, and grew both intellectually and socially through doing so. Brendan never backed away from the challenges of research.”

In addition to the dean's medal, McGovern also was recently awarded the UW's prestigious Bonderman Travel Fellowship, which will support his next endeavor--eight months of world travels in which he plans to investigate the ways in which music can instigate social change in various cultures in the Caribbean, South America, West Africa, and Southeast Asia.

Learn more about the 2017 Dean's Medalists in A&S Perspectives Magazine.