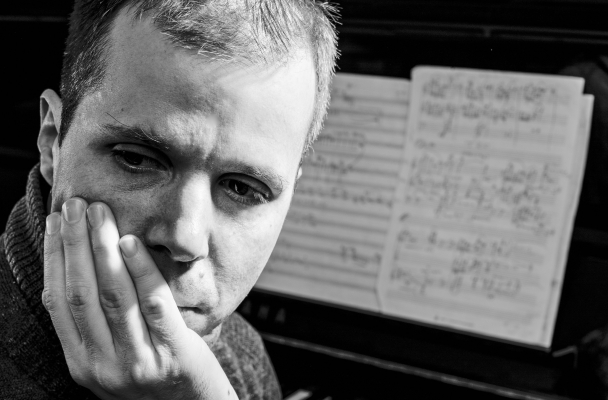 The American Academy of Arts and Letters has named UW faculty composer Huck Hodge the recipient of the Charles Ives Living, the largest monetary award granted exclusively to American composers.

The cash award of $200,000 enables—and in fact requires—the recipient to “quit his day job” for a two-year period in order to focus solely on composing, a luxury not afforded Ives himself, who composed the body of his work in relative obscurity while earning a living in the insurance trade.

“Mr. Hodge, a brilliant colorist, and creator of gorgeous, lyrical soundscapes joins the succession of distinguished composers who have received the award,” said Yehudi Wyner, president of the Academy, in the organization's January 24 announcement of the award.

While on leave from the UW starting July 1, 2018, Hodge (who currently serves as chair of the UW Composition program) plans to continue his prolific output of new works developed in his eight years on the UW Music faculty, during which he has garnered numerous honors, including a prestigious Rome Prize in Composition, the Gaudeamus Prize, the ISCM League of Composers Award, fellowships from the Guggenheim Foundation and the American Academy of Arts and Letters, the Aaron Copland Fellowship from the Bogliasco Foundation, and awards from ASCAP, New Music USA, and the Concorso Franco Donatoni in Italy.

Read the full announcement from the Academy of Arts and Letters here.

Q and A: Huck Hodge, Composer

Editor's note: We caught up with faculty composer Huck Hodge recently for a conversation about his creative process and his plans for the two years ahead.

The Charles Ives Living award literally buys you time—two years’ worth—to devote entirely to your composing. It’s too soon for you to have the next two years all mapped out, but do you have a general sense of how things might unfold once July 1 rolls around? Will we see much of you at the UW over the next two years or do you plan to retreat or travel?

I will still be around the UW from time to time curating some concerts and other performance activities in the composition program. This award will enable me to start thinking in depth about some larger-scale projects that I have had in mind for a while. Some of these are currently under commission and others are more open-ended. I plan to travel extensively, but I will continue to reside in Seattle.

Who are some of the composers, artists, or philosophers who have most deeply influenced your work? What about them draws you?

On a technical and stylistic level, I draw inspiration from a very wide variety of sources: free jazz, film noir soundtracks, painting, poetry, non-linear narrative, pretty much anything that I find interesting. I've recently been influenced by various philosophical traditions, but not in the most obvious way. There are many composers that write music that, in one way or another, is inspired by specific ideas of a given philosopher, so that you might say that the piece is “about” those ideas. But I see music itself as posing certain interesting philosophical questions in its own way.

Recently, I've been interested in exploring the ethical dimension of experimental music and what that might mean for composing and listening. It may seem strange to talk about ethics here, since this music comes out of a historical tradition with an ideal of formal or self-sufficient art, devoid of any specific meaning. This “meaninglessness” was often taken to be a mark of absolute artistic freedom to transcend the mundane and transitory things in the world: “all art is quite useless”, in the words of Oscar Wilde, which by the way, was meant as a compliment. So, if music is not about anything, it is not at all obvious how it could provide any sort of ethical insight.

But I think that experimental music in particular can make us question our default modes of experience and bring us into an attitude of openness, which is the basis for ethical engagement with others. It can do this through its characteristic idiosyncrasy, quirky irregularity, and unusual approach to the notion of musical beauty. Traditionally, in western music, elements like noise, dissonance, silence, etc. have been taken to be problems either to be resolved over the course of a piece or excluded from music entirely. But experimental music creates a situation in which these elements are allowed to unfold in their own strange beauty and complexity. In a similar way, the unconventional use of musical instruments and found objects can transform “mistaken” performance practices or pieces of “garbage” into an encounter with radical beauty. The sort of shift in perspective that this brings about can shape and intensify the imaginative sensitivity in perception and understanding required for enhanced ethical engagement with the world.

Last year you completed a commission for the UW Wind Ensemble, “At dawn I chant my own weird hymn” for solo offstage trumpet and wind ensemble. The piece premiered last spring at the UW with faculty member David Gordon on trumpet. In your program note for this piece you refer to a famous work by Charles Ives, “The Unanswered Question,” in which there is a somewhat similar arrangement of onstage and offstage performers, though Ives reversed the effect, placed the trumpet onstage and the strings offstage. How directly were you influenced by Ives or this particular work of his when composing this piece? In general, have his pieces inspired you as a composer, and if so, to what extent?

I think Ives is a good example of a composer who was interested in exploring the philosophical implications of music. In the program note to The Unanswered Question he tells us that the trumpet repeatedly poses the “perennial question of existence” to which the musical ensemble responds in increasingly frustrated but continuously doubtful musical “answers”. Ives’s piece seems to accord a certain centrality to the individual (the trumpet is onstage, the ensemble is off), suggesting that even though society may tell you one thing, true certainty comes from within. My piece takes a much more skeptical view. The trumpet is offstage the whole time and at the end is in a completely different part of the building, creating a sense of distant, elusive individuality. The idea here is that individuality is only expressible in relation to society and in the modes of expression (language, culture) that the community provides to each of us. To forgo society’s ready-made answers is to assume a position of exteriority, to give up to a significant degree the power to directly influence those around you. This does not mean we need to exclude others from our lives. Rather, to be an individual is to dwell in this distance, however close our proximity to others may be.

In the same piece you recall a sublime musical experience you had in which the final notes of a piece you heard lingered in such a faint suggestion of sound as to almost be inaudible or imaginary. Do you find—from the feedback you receive from listeners—that the personal elements you insert into pieces have the desired effect, or are you sometimes surprised or disappointed with reactions to your music because they weren’t what you intended to provoke?

Everyone is going to bring their own history and perspective to the music they hear, and that is a wonderful thing. Even so, I like the idea that we can understand each other, however imperfectly. It’s not like there is some perfect, ideal meaning that is in my mind that simply degrades in the process of transmission to other minds. Rather, the fact that other people understand my intentions in their own way reveals that my own understanding of those intentions is incomplete. To me, this suggests that no thought, no word, no sound can be grasped by one person in its entirety. No one is entirely self-reliant, but at the same time, no one is entirely alone either.

To extend that question, how much does it matter to you what listeners might think or feel about your music and how much effect does the intended audience for a piece have on you while you are in the process of creation?

This does play an important role in the way that I shape my music. In fact, this may be another expression of a certain ethical impulse I feel as a composer. But again, I want to allow enough space for everyone to form their own unique interpretation about what they hear. My intention is not to manipulate listeners into a specific viewpoint about the music. At the same time, I like to set up expectations in the listeners that may be fulfilled, elided or even thwarted over the course of a piece. I generally want the listeners to enjoy my music, but in a way that proves elusive to articulate.

Along those lines, your blog, “The Amoeba Weeps,” contains a section of essays and aphorisms, including a recent post on the topic of individuality that also serves as a program note for the piece “At dawn I chant my own weird hymn.” You describe the tension that is always present between the individual artist and “society,” or the group or collective, that plays out in this piece between the ensemble on stage and the trumpet soloist offstage. You conclude that in striving to find one’s voice or achieve originality as an artist, time and distance from the group is essential, but that the artist can only go so far in creative exploration before the discoveries or expressions become unintelligible to the larger community. Thus, the need for some semblance of shared language or understanding within which the individual may challenge the tired clichés of the accepted structures. Is that conclusion a comfort, a frustration, or something more complex?

All of the above. It’s interesting, though, that compositional discovery is usually taken to be discovery about musical material itself and not discovery about how people might hear or react to the music. Quite often composers are engaged in “data sonification”, that is, a way of composing in which data from non-auditory structures are used as the basis for musical material. A problem that arises in a lot of data-driven music is a failure to adequately translate these structures into the constraints of musical perception, so that listeners find it very difficult, if not impossible, to connect what they hear to the structures and processes that generate it. Translation is a good way to characterize this failure. It’s very much like the problems that arise when translating poetry from one language into another. In order to do this well, the translator needs to take a somewhat non-literal approach to the poem. If the poem is translated word for word the project will be a disaster. Likewise, if a composer just uses data in a one to one relationship with musical material the results will often seem random or incoherent. It seems to me that the problems that composers of data-driven music encounter are usually due to an absence of poetic sensibility.

That being said, part of the ethical potential of experimental music resides precisely in the fact that it doesn’t just present the listener with material that is stereotypically pleasant or easy to follow. It’s extremely valuable to create situations in which listeners feel unmoored, even confused, but it’s a very delicate balance. In order for this confusion to be effective there needs to be something familiar about which to be uncertain. But in the same respect the strange must be made familiar, approachable, even beautiful. These ideas are in a sort of tension, a strange dance. But this is what I love about approaching music this way and the perspective it gives me on the world.

Learn more about composer Huck Hodge and his music at www.huckhodge.com.