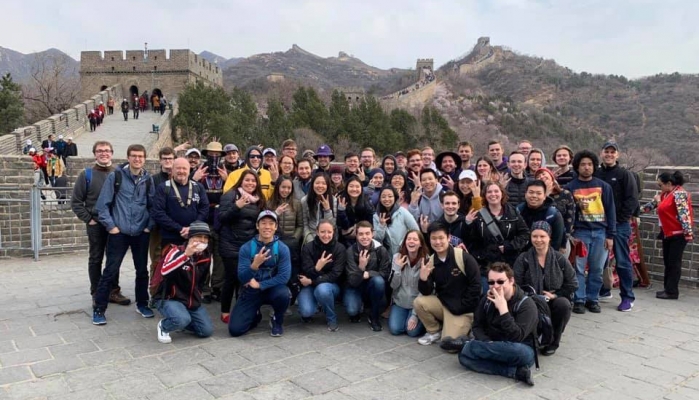 A successful spring break China tour by the University of Washington Wind Ensemble and director Timothy Salzman enabled 56 UW student musicians to undertake international travels in a memorable way, performing concerts and delivering master classes in three cities—Chengdu, Xi’an, and Beijing. The UW Office of Global Affairs reports some of the highlights of the tour in this feature, “Building Bridges Through Music," originally published April 9, 2019.

For Professor Timothy Salzman, “music is a universal language”. As director of the UW Wind Ensemble, he delights in helping students perfect their playing. But even more so, in using music as a pathway for connecting students with new people and experiences. Over spring break, he brought the entire 56-member UW Wind Ensemble on an unforgettable trip to China. Their packed itinerary included opportunities for hands-on learning at every turn.

The Wind Ensemble’s journey began in the city of Chengdu. Hosted graciously by partners at Sichuan University, the students played two concerts, one with an audience of 3000. Most audience members had little prior exposure to their craft. “Wind ensemble music is pretty new to most people in China,” shares Professor Salzman. “People were just taking it in.”

This trip to China marked a first trip outside the country for many of the musicians, including UW junior and trumpeter Jason Kissinger. The Spokane native also has Diabetes, and he was understandably concerned about successfully managing his health needs during the trip. Jason stayed healthy with the support of Professor Salzman and his fellow students. (continued...)

View many sets of photos from the 2019 China Tour on the UW Wind Ensemble's Facebook page.