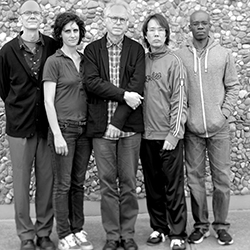 After Eyvind Kang and one-of-a-kind cartoonist Jim Woodring join him in an opening performance, Bill Frisell presents his Big Sur Quintet, fresh from a CD release and as riveting a band as any working today. Playing Frisell’s entrancing compositions, the group evokes the singular spacious beauty of the Southern California coastline. Joining the guitarist are Jenny Scheinman on violin, Seattle-based Eyvind Kang on viola, Hank Roberts on cello, and Rudy Royston on drums.

This musical kinship with Miles Davis has been cited repeatedly in the music press. The New Yorker notes: "Bill Frisell plays the guitar like Miles Davis played the trumpet: in the hands of such radical thinkers, their instruments simply become different animals. And, like Davis, Frisell loves to have a lot of legroom when he improvises--the space that terrifies others quickens his blood.”

A suite commissioned by and premiered at the Monterey Jazz Festival in 2012, Big Sur was composed by Bill Frisell while in a 10-day residence at the Glen Deven Ranch in Big Sur. Utilizing a hybrid group culled from Frisell’s 858 Quartet string ensemble and post-bop Beautiful Dreamers trio, Big Sur is not a dreamy, pastoral depiction of the wooded California coast along Highway 1. Instead, Frisell’s unique amalgam of blues, country and jazz combine to form a dynamic invocation of the breathtaking collision of oceanic vistas, redwood forests and rolling plains that mark the magical area south of Monterey – an area that has transfixed generations of artists and writers including Jack Kerouac and Henry Miller. The quartet features string players Jenny Scheinman, Eyvind Kang and Hank Roberts along with guitarist Frisell and drummer Rudy Royston, the group appearing on the new recording released by Sony Classical’s newly-revived OKeh label in June of 2013.

Jim Woodring was born in Los Angeles in 1952 and enjoyed a childhood made lively by an assortment of mental an psychological quirks including paroniria, paranoia, paracusia, apparitions, hallucinations and other species of psychological and neurological malfunction among the snakes and tarantulas of the San Gabriel mountains.

He eventually grew up to bean inquisitive bearlike man who has enjoyed three exciting careers: garbage collector, merry-go-round-operator and cartoonist. A self-taught artist, his first published works documented the disorienting hell of his salad days in an “illustrated autojournal” called JIM. This work was published by Fantagraphics Books and collected in THE BOOK OF JIM in 1992.

He is best known for his wordless comics series depicting the follies of his character Frank, a generic cartoon anthropomorph whose adventures careen wildly from sweet to appalling. A decade’s worth of these stories was collected in THE FRANK BOOK in 2004. The 2010 Frank story WEATHERCRAFT won The Stranger’s Genius Award and was a finalist for the Los Angeles Times Book Prize for that year. The most recent Frank book, CONGRESS OF THE ANIMALS, was released in 2011.

Woodring is also known for his anecdotal charcoal drawings (a selection which was gathered in SEEING THINGS in 2005), and the sculptures, vinyl figures, fabrics and gallery installations that have been made from his designs. His multimedia collaborations with the musician Bill Frisell won them a United States Artists Fellowship in 2006. He lives in Seattle with his family and residual phenomena.