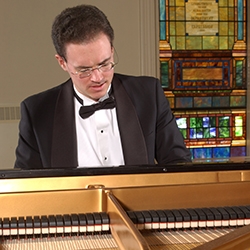 Critically acclaimed as a “musician’s pianist,” Matthew Bengtson has a unique combination of musical talents ranging from extraordinary pianist, to composer, analyst, and scholar of performance practice, and thus is in demand as both soloist and collaborator. As a La Gesse Fellow, he has been presented in concerts in France and Italy, Italy and Hungary, at Thomas Jefferson’s home Monticello, and in solo recitals at Carnegie Hall’s Weill Recital Hall. He is a favorite soloist in the Pro Musica series in San Miguel de Allende, Mexico. He has performed with the Reading, Pottstown and Ridgefield Symphony Orchestras, and has appeared with violinist Joshua Bell on NPR’s “Performance Today” and XM Satellite Radio’s “Classical Confidential.”

An advocate of both contemporary and rarely performed music, he commands a diverse repertoire, ranging from William Byrd to Berio and Ligeti. One special interest is the music of the early twentieth century, especially that of Alexander Scriabin and Karol Szymanowski. His doctoral research and first studio recording were devoted to Szymanowski's 22 mazurkas. His interpretation of six Scriabin Sonatas can be heard on a recent release by Roméo Records. The American Record Guide relates his recording to performances by Horowitz and Richter, praises his “rich tonal colors and dazzling technique,” and asks, “Has Scriabin ever been played better?”

Mr. Bengtson studied piano performance as a Harvard undergraduate with Patricia Zander; he also studied contemporary literature with Stephen Drury, and chamber music and performance practice with Robert Levin. He studied with Ann Schein at the Peabody Conservatory of Music, earning his MM and DMA degrees in piano performance, minoring in harpsichord with Webb Wiggins. He studied fortepiano with Malcolm Bilson on a fellowship at Cornell University. He continues to perform on all three instruments, as soloist and as collaborator, as in the Aurelio Ensemble. He is involved in an extensive recording project of early English instruments of the Charles West Wilson collection, for Griffin Renaissance Records.

Mr. Bengtson has participated in many American music festivals, such as the Aspen Music Festival, the Summer Institute for Contemporary Piano Performance (SICPP) at New England Conservatory, and the Classical Workshop and Baroque Performance Institute (BPI) at Oberlin Conservatory. In Europe, he studied at the Internationale Sommerakademie “Mozarteum” in Salzburg, Austria, and the Centre Acanthes in Avignon, with Claude Helffer and at the American Conservatory at Fontainebleau, France, with Philippe Entremont. In Salzburg, he performed Boulez’s Sonata no. 1 in the Wiener Saal, and at Fontainebleau, he was awarded the Prix de la Ville de Fontainebleau for his performances.

Also known as a thoughtful writer on music, he was awarded the 2003 Stefan and Wanda Wilk Prize for Research in Polish Music for his paper The “Szymanowski Clash”: Methods of Harmonic Analysis in the Szymanowski Mazurkas. His comparative review of performances of Beethoven’s Diabelli Variations is published in the New Beethoven Forum. His article on a competitive experience in Moscow was published in the Journal of the Scriabin Society of America. He teaches privately at the University of Pennsylvania and at Haverford and Bryn Mawr Colleges, and is Vice-President of Tri-County Concerts Association. Besides his musical attainments, Mr. Bengtson was educated at Harvard University with a focus in mathematics and computer science. He reads Latin and Greek, is a 3-handicap golfer, a dan-level go player, and a chess FIDE master (FM).