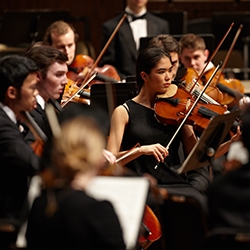 The University of Washington Symphony Orchestra

David Alexander Rahbee conducts members of the University Symphony in a concert of works by C.P.E. Bach and Joseph Haydn. Plus: School of Music faculty artist Stephen Stubbs conducts a work by Arcangelo Corelli, featuring guest musicians from Pacific MusicWorks.

Joseph Haydn: Symphony No. 59 in A Major, "Fire"
conducted by David Alexander Rahbee

He was awarded the American-Austrian Foundation "Herbert von Karajan Fellowship" for young conductors in Salzburg (2003), as well as fellowships from International "Richard-Wagner-Verband-Stipend" in Bayreuth, Germany (2005), the Acanthes Centre in Paris (2007) and the Atlantic Music Festival in the USA (2010). At the Salzburg Festival in 2003 he was assistant conductor of the International Attergau Institute Orchestra, where he also worked artistically with members of the Vienna Philharmonic Orchestra and guest conductors including Bobby McFerrin.

The first of his several ground-breaking articles on Gustav Mahler, “Gustave Charpentier’s Louise and Mahler’s Sixth Symphony” appears in the spring 2013 edition of the music journal Sonus. His arrangement of the Overture to Rossini's Barber of Seville for trombone quartet has been recorded and released on CD by Summit Music, played by the quartet known as Four of a Kind, four of the world’s greatest trombonists. This arrangement, along with many others, is published by Warwick Music, England.

Stephen Stubbs
After a thirty year career in Europe, musical director and lutenist Stephen Stubbs returned to his native Seattle in 2006. Since then he has established his new production company, Pacific Musicworks, and developed a busy calendar as a guest conductor specializing in baroque opera and oratorio.

With his direction of Stefano Landi’s La Morte d’Orfeo at the 1987 Bruges festival, he began his career as opera director and founded the ensemble Boston Early Music Festival Tragicomedia. Since 1997 Stephen has co-directed the bi-annual opera and is the permanent artistic co-director. BEMF’s recordings of Conradi’s Ariadne, Lully’s Thesee, and Psyché were nominated for Grammy awards in 2005, 2007, and 2009.