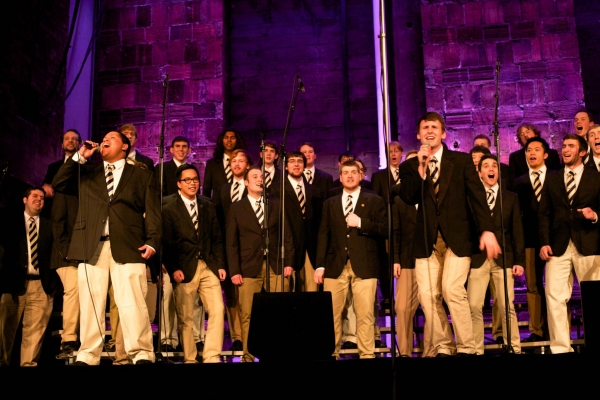 The UW Men’s Glee Club presents its Winter Quarter concert, joined by a special guest a cappella group On the Rocks and men’s choral groups from area high schools.

ARTIST BIOS
On the Rocks

On The Rocks was founded in 1999 by Leo DaSilva and Peter Hollens when they attended the University of Oregon. The group established itself through five albums with an EP, a viral video of Lady Gaga’s Bad Romance, and appearances on NBC’s show “The Sing Off”. And now they are a new group of twelve living up to their past of fame and notoriety. You may ask us, “Why don’t you sing Lady Gaga?” or “Where are the guys from the ‘Sing Off’?” Sadly those days are gone. Those who graduated left us a great legacy and we look up to their talent every time we sing. But talent never graduates. Talent built this group from a time before the boom of TV shows and viral videos, because having the time of our lives has always been the goal and will continue to be forever. So know this: Every time we perform, we step on stage with the vigor of every man who has ever sang in our name. On. The. Rocks.

The University of Washington Men's Glee Club is a non-auditioned choir that rehearses twice a week on Tuesdays and Thursdays from 5-6:20pm. We sing a variety of repertoire from classical, doo-wop, barbershop, and traditional collegiate glee club literature. We usually perform one larger concert each quarter as well as performances at sporting events and other campus and community activities.

Steven M. Demorest conducts the University of Washington Men's Glee Club and teaches graduate and undergraduate courses in choral music methods, research methods, psychology of music, music and language, and the cognitive neuroscience of music. He is professor of Music Education and was a Donald E. Petersen endowed fellow from 2003-2006. In 2007 he received the Weston H. Noble award for outstanding contributions to choral music from Luther College, his alma mater.

He is the author of Building Choral Excellence: Teaching Sight-singing in the Choral Rehearsal, published by Oxford University Press, and the editor of a series of lectures by Weston Noble, Creating the Special World, published by GIA.

A nationally known clinician, Demorest has lectured at the American Choral Directors Association National Conference, The Music Educators National Conference and at many state and regional ACDA and MENC conferences. He served for seven years as the music director for the Northwest Chamber Chorus, a select 45-voice mixed ensemble. In addition to a busy concert schedule, they produced four compact discs: Credo, Wassail!, Coronation Anthems, and Songs of the Americas.

Demorest holds a Ph.D. in Curriculum and Instruction from the University of Wisconsin-Madison, an M.M. in Choral Conducting from Westminster Choir College, and a B.A. in music from Luther College.

The University of Washington Men's Glee Club has been in existence since 1895 and was officially founded around 1900. Below is a list of the group's known conductors throughout its history.