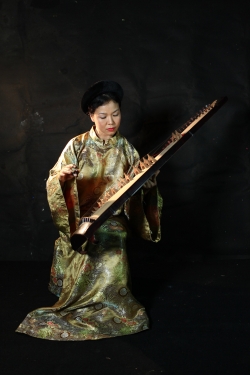 Members of the Six Tones Ensemble perform at Brechemin Auditorium on March 3.

The Vietnamese language is a tonal language. It uses six tones, or intonations, which may give the same utterance a different meaning. The composition 'The Six Tones' is the fruit of a close collaboration between Henrik Frisk, Stefan Östersjö, Than y and Ngo Tra My which took its beginning in April 2006. The intention was to the optimal conditions for an open meeting between different cultures on equal terms.

At the outset we attempted to get beyond a collage-like superimposition of typical elements from the two cultures, but rather to strive for a more experimental sound. A series of collective improvisations based on some material originally put forward for the guitar and electronics piece 'Repetition Repeats all other Repetitions' written for Stefan Östersjö, formed the basis for the composition.

After many negotiations and further improvisations the piece found its final form at the first performance in Hanoi in October 2006. The four string instruments, dan tranh (a traditional Vietnamese zither), dan bau (a single string, electrically amplified Vietnamese traditional instrument, banjo (plucked as well as played with e-bow) and 10-stringed guitar are electronically manipulated in the computer part, which also contains some prepared material.

'The Six Tones' is dedicated to the Vietnamese master musicians Nguyen Thanh Thuy and Ngo Tra My.