Circle of Friends: Music of Brahms, Schumann, and Mendelssohn 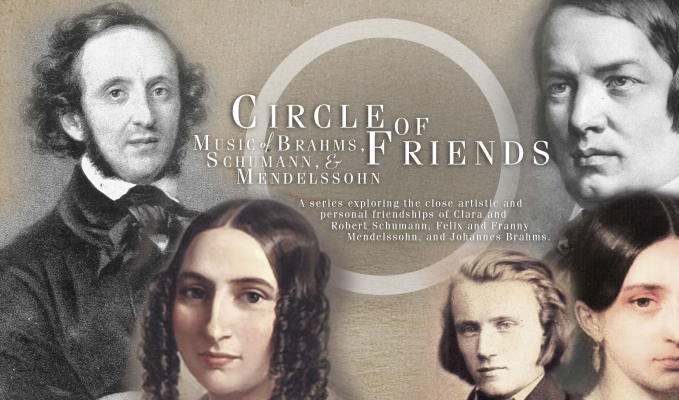 Music of Brahms, Schumann, and Mendelssohn is featured on the Circle of Friends series.

The close artistic and personal friendships of Clara and Robert Schumann, Felix and Fanny Mendelssohn, and Johannes Brahms constitute one of the most remarkable orbits of interactions in musical history. This series, produced by piano professor Robin McCabe, features samplings from their rich and prolific repertoires, with historical context offered in commentary and narration.  This program features a pre-concert lecture by Music History professor George Bozarth.

An illustrated slide lecture on art and romanticism in music.

Brahms: Variations on a Theme of Robert Schumann, Opus 9

George Bozarth specializes in 19th-century studies, especially the music of Johannes Brahms and musical life in Boston. He is also interested in the early history of the piano.

He is the founding Executive Director of the American Brahms Society and co-author of the article on Johannes Brahms for the second edition of The New Grove Dictionary of Music and Musicians. Bozarth is the editor of Brahms Studies: Analytical and Historical Perspectives (Oxford University Press),The Brahms-Keller Correspondence (University of Nebraska Press), and On Brahms and His Circle: Essays and Documentary Studies by Karl Geiringer (Harmonie Park Press). His most recent book, Johannes Brahms and George Henschel: An Enduring Friendship, appeared with Harmonie Park Press in 2008.

Bozarth has published numerous articles on Brahms, focusing on compositional process, problems in chronology, documents, word-tone relationships in the songs and piano music, editorial issues, and questions of performance practice. He has edited the cantata Ach Gott, von Himmel sieh darein, BWV 2, for the Neue Bach-Ausgabe, and the complete organ works of Brahms for G. Henle Verlag and the Neue Brahms-Ausgabe. His current projects include books on the Irish fortepiano maker William Southwell, musical life in late 19th-century Boston, and Brahms's process of composing songs. He has held grants from the American Council of Learned Societies, the American Philosophical Society, and the National Endowment for the Humanities.

At the University of Washington he teaches courses on music from the Baroque, Classical, and Romantic periods, including specialized courses on chorale-based music from Luther to Bach, the choral music, art songs, and chamber music of Brahms, cultural life in 19th-century Boston, and performance practices in the 18th and 19th centuries.

A fortepianist who owns a collection of early pianos (1790-1895) and specializes in accompanying German art song, Bozarth founded the ensemble The Classical Consort and has served as an Artistic Director of the Seattle early music series Gallery Concerts since 1989.

Bozarth took his Ph.D. in historical musicology at Princeton University and was Ruth Sutton Waters Endowed Professor of Music at the University of Washington, 2008–11.