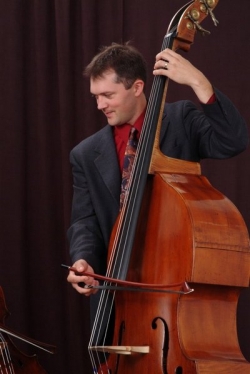 Pacific Northwest musician Spencer Hoveskeland is one half of the Duet/ Bottom Line Duo, a bass and cello duo that tours internationally and in the United States and Canada. The duo has also performed for over a quarter of a million students nationwide and has been presented in every imaginable way and a few unimaginable ones.

Spencer has served the board for the Gene Nastri School of the Arts in Mulkilteo, WA  and helped that organization to produce a chamber music festival in Cebreros, Spain. He has also served the boards of the Seattle Musicians Union, Montana Performing Arts Consortium, and Arts Northwest.

As a freelancer Spencer has performed for numerous Broadway musicals, orchestras, movie soundtracks, and has added bass notes to many places that needed them, and a few that didn’t.