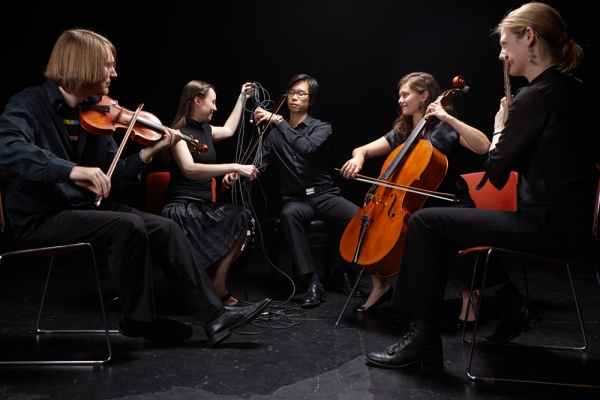 Series Background: The University of Washington School of Music and The Center for Digital Arts and Experimental Media (DXARTS) co-sponsor this series featuring groundbreaking new works and modern classics by faculty and guest composers.

In this STRING  QUARTET, the initial musical idea—a short melodic line—is re-interpreted as a spatial curve, presented through several distinct levels of scale and perspective simultaneously.   The unfolding of the piece, then, does not involve the evolution of a clearly  stated  idea  through  subsequent  variations,  but  moves among fragments of essentially related materials, gradually reveal- ing a central presence.
—JEFF BOWEN

“Amazing similarity to certain basic human utterances of an inde- cent nature,” wrote one critic after the 1930 premiere of ANTON WEBERN’s QUARTET FOR VIOLIN, CLARINET, TENOR SAXOPHONE, AND PIANO.  Webern himself described the form of the work as “scatty.” Nonetheless, the piece is an important work for Webern; it his only work—and possibly the only work in the western classical canon— that uses this instrumentation, and though it was not exactly well received by the public, his fellow contemporaries of the Second Viennese School loved it.  Berg called it a “miracle” with great “originality,” and Schoenberg echoed this sentiment, deeming it “fabulous.”  The quartet was originally conceived in 1928 as a three-movement “concerto for violin, clarinet horn, piano, and string orchestra—in the spirit of some of Bach’s Brandenburg con- certos,” but by 1929, Webern has reduced the length to two movements and altered the instrumentation.  The work is well deserving of Berg’s praise, displaying great originality and a bal- ance of simplicity and complexity; Webern maintains his brand of minute organization, but also achieves freedom through his splin- tering of motives and musings with old Viennese dance rhythms. As previously stated, the instrumentation is highly unique, and Webern’s orchestration in the ensemble makes the piece a master- ful study of color in serial music.
—Brooks Tran

One of FRANCO  DONATONI’s  earliest influences was the music of Béla Bartók.  One can possibly imagine a link to Bartók’s Music for Strings, Percussion and Celeste in tonight’s later work, AVE.  Unlike the Bartók,  Donatoni  relies  wholly  on  upper-register  instruments,
combining the forces of the piccolo, glockenspiel and celeste to cre- ate a kind of star-music, that is both intricate and playful.  Dona- toni offsets the cascading lines in the glockenspiel and celeste by a sixteenth note with each iteration of the opening line, using the piccolo as the sustaining “bass” instrument of the ensemble.  Never aggressive, Donatoni’s work evokes a demented children’s song on a small toy piano…complete with pointed, rhythmic creatures and the bright landscape of the running notes, perhaps as stream flow- ing through the mountains.
—Daria Binkowski

MORTON FELDMAN’s FALSE RELATIONSHIPS AND THE EXTENDED ENDING (1968) is a piece that explores the various (missed) connec- tions that occur by separating two musical groups in the same space.  Group 1 (piano, violin and trombone) and Group 2 (cello, 2 pianos and chimes) both occupy the stage but play independently from one another.  The result is the occasional alignment, both rhythmically and harmonically, inside of Feldman’s characteristi- cally slow developing textures.
—Luke Fitzpatrick