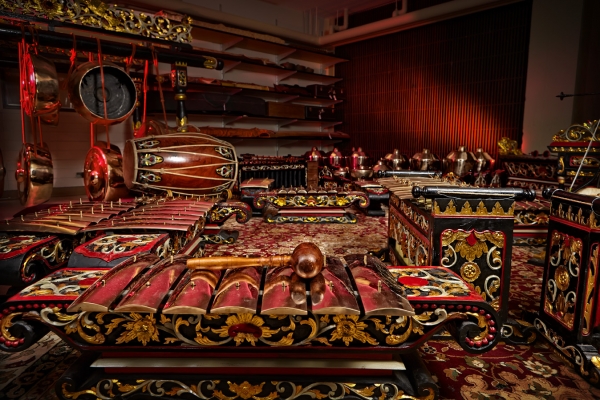 Renowned Javanese musician and eleventh-generation dhalang (puppetmaster) Ki Midiyanto has performed for over twenty years in Indonesia, the United States, Canada, Australia, New Zealand, and Singapore. Born in Wonogiri, a rural district in the south central part of the island of Java in the nation of Indonesia, Midiyanto went on to study gamelan and shadow puppetry at the Sekolah Tinggi Seni Karawitan (Indonesian Academy of Musical Arts) in Surakarta, Java before venturing abroad to teach and perform. He is currently a Lecturer in Gamelan on the music faculty at the University of California, Berkeley.

Heri Purwanto, a highly respected teacher and performer from Central Java and master musician of the Javanese gamelan, is in residence in the Spring quarter at the University of Washington School of Music. He previously taught gamelan at the University of California-Berkeley, where he served as director of Gamelan Sari Raras, a performing ensemble in the Department of Music at UC Berkeley that includes students and former students at Berkeley as well as musicians from surrounding communities.

Jessika Kenney, born in Spokane, Washington, is a vocalist and composer known for haunting timbres and a wide range of collaborations and vocal experimentation, supported by a devotion to the living practice of traditional vocal arts.  She has been described as "one of the best non-Indonesian singers of the Javanese gamelan", "a rare being" (Sufi magazine) in the context of the Classical Persian art of Avaz which she studies with Ostad Hossein Omoumi. Her own works include solo and ensemble vocal and piano pieces, as well as two hour-length works for gamelan and Sufi poetry: "Atria" premiered by the Cornell Gamelan Ensemble, and "For Samsu Tabarit" premiered by Gamelan Pacifica.

Jessika collaborates with multi-instrumentalist and composer Eyvind Kang, drawing on myriad mutual interests, including explorations of "radif" as poeme and 'matheme' (Kang's term).  They have co-composed many works including "Aestuarium", recorded in 2005 by Mell Dettmer, and based on fragments of a Latin psalm, and "Concealed Unity" for choir and orchestra commissioned by Iceland Tectonics festival. In 2012 they completed six new pieces and translations released as "The face of the earth" on Ideologic Organ, which draws upon Indonesian and Persian literary traditions.

Jessika has shared ideas and vocal sounds with many visionary and wild-hearted musicians and artists of our time, and in May of 2013 was asked to sing and recite the Persian poetry of Rumi with Ostad Omoumi and Fatemeh Keshavarz for a "Dialogue of Two Oceans" at the University of Maryland, presented in collaboration with H.H. the 14th Dalai Lama of Tibet.

Ms. Kenney is an Adjunct Faculty member at Cornish College of the Arts, from which she holds a Bachelor's degree in Music, and is a student of the Persian language with instructors from the University of Washington.

Christina Sunardi is an assistant professor in the Ethnomusicology program in the School of Music at the University of Washington, where she has been teaching since 2008. Her interests include performance, identity, spirituality and ethnography in Indonesia. Her work focuses in particular on the articulation of gender through music, dance, and theater in the cultural region of east Java.

Her publications include articles in Bijdragen Tot de Taal-, Land en Volkenkunde, Asian Music, and Ethnomusicology, as well as reviews in the Journal of Folklore Research Reviews, American Journal of Islamic Social Sciences, and Indonesia.  Dr. Sunardi has been studying and performing Javanese arts since 1997 in Indonesia and the United States, earning her Ph.D. in music from the University of California, Berkeley in 2007. She is currently working on a book about the negotiation of gender and tradition through dance and music in east Java.  In addition to her academic work, she enjoys playing gamelan music with the Seattle-based ensemble Gamelan Pacifica and performing as an independent dancer.

GAMELAN PACIFICA has performed extensively in the Pacific Northwest, as well as Canada and other parts of the U.S. Originally formed in 1980, Gamelan Pacifica is among the finest ensembles devoted to the performance of music for gamelan in the U.S. It is an active and adventurous ensemble, with a reputation for creating diverse productions merging traditional and contemporary musical forms with dance, theater, puppetry, and visual media. They have been guest performers on The Smithsonian Institute's Festival of Indonesia, New Music Across America Festival, Vancouver New Music Society, On the Boards, Walker Art Center, Performing Arts Chicago, many others. In the Northwest they perform regularly and have appeared at the University of Washington, Seattle University, Town Hall, Cornish College of the Arts, the Seattle Art Museum, Evergreen State College, Centrum, Bumbershoot Festival, Arts in Nature Festival, University of Orgeon, Whidbey Institute, CenterStage, and many, many others. Visiting artists have included some of the most notable artists of Indonesia, including Sutrisno Hartana, Wayan Sinti, Didik Nini Thowok, Sri Djoko Rahardja, I Made Sidia, Endo Suanda, Dedek Wahyudi, Goenawan Mohamad, and Tony Prabowo. Gamelan Pacifica's CD, Trance Gong has received international acclaim and is available from O.O. Discs. Gamelan Pacifica is directed by noted composer and Cornish College of the Arts Professor Jarrad Powell. In addition to sponsoring the Javanese gamelan  ensemble, Gamelan Pacifica is a well-respected non-profit arts organization that supports various programs and special projects relating to music and dance, with a special emphasis on cross-cultural and interdisciplinary collaboration. Gamelan Pacifica has been the recipient of numerous grants, including support from the National Endowment for the Arts, the Rockefeller Foundation and Arts International. Gamelan Pacifica is currentlIy supported in part by sustaining funds from the Seattle Office of Arts and Culture and 4Culture.

Gamelan
Gamelan are ensembles largely composed of struck idiophones in the shape of gongs and slabs.  Although many such ensembles are found throughout Southeast Asia, gamelan are primarily associated with musical cultures on the Indonesian islands of Java, Madura, Bali, and Lombok.

Three types of metal (or metallic alloys) are commonly used to make gamelan: bronze, brass, and iron.  Bronze is usually the most preferred. In addition to the choice of material, an owner's wealth and taste may influence the number of instruments, the instruments’ size, and the instruments’ decoration.

Although different gamelan may vary slightly in their tunings, most Javanese gamelan music uses the 5-tone sléndro or the 7-tone pélog tuning systems.   A gamelan may have two sets of instruments, one in each tuning, or one set in one of the two tunings.  Neither of these tunings are exactly the same as the most commonly used Western tuning system.  For this reason, gamelan may sound "out-of-tune" to those with a strong sense of Western tuning or “perfect pitch.”

The Javanese wayang kulit (shadow puppet play) is a complex form of theater. It is many things to many people in Java and around the world--entertainment, a way to engage the supernatural, a means of education, and a form of deep philosophical reflection.  Many Javanese understand a wayang performance on different levels.  Some may not completely understand the obscure imagery contained in the songs the puppeteer sings in literary Javanese, but nevertheless enjoy the beauty of his voice.  Some people may most enjoy the lively fight scenes while others delight in the comedy of the clowns or the beauty of the female singers.

In Java, one is not expected to pay constant attention throughout the entire play, which generally lasts from around 8:00 or 9:00 p.m. to about 4:00 a.m.  One may wander away to chat with friends and enjoy tea or food purchased from one of the many vendors who set up small stalls. Children, who form a large part of the audience, often fall asleep during the more philosophical dialogues and wake up when their favorite clowns appear.

In general, a play falls into three main acts, each in a different musical mode, or pathet.

The divisions are marked on the screen by the planting of a puppet shaped like a tree or mountain.

Dhalang (shadow puppet master)
The dhalang is in complete charge of the performance. Not only does he manipulate the puppets, deliver all of the dialogue using different voices, narrate, and make witty social commentary drawing on current events, he also cues the gamelan.  He must know the intricacies of many plots.  The story of a particular performance is usually an episode drawn from The Mahabharata or The Ramayana, story cycles imported from India, or from indigenous Javanese tales.  Because of their vast cultural knowledge, dhalang are often revered for their deep understanding of life and their roles as teachers in the community.