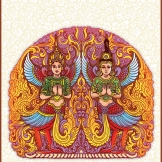 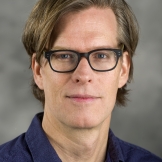 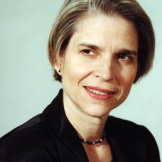 I.  Multiple Musical Voices from Myanmar

The immense variety of peoples found in Myanmar poses a conundrum for anyone attempting to represent the country musically.  With numerous video and audio examples this talk will offer several different perspectives through which to approach the myriad of music cultures in the country.

IV.  Sandaya and the Echoes of a Burmese Soundscape

3. Charting some moments of "Than Yo" Improvisation by Gita Lulin U Ko Ko

in a Robert  Garfias recording from 1971

Gavin Douglas holds a BMUS degree (performance classical guitar) and a BA degree (philosophy) from Queen's University (Canada), a MM (ethnomusicology) from the University of Texas at Austin and a PhD (ethnomusicology) from the University of Washington, Seattle. He joined the UNCG School of Music, Theatre and Dance in 2002 and teaches courses in World Music, Asian Music, American vernacular musics and guides seminars on music and society. His research interests include nationalism, politics, globalization and cross-cultural aesthetics. Douglas' ongoing fieldwork in Burma (Myanmar) focuses on the state patronage of traditional music and the role it plays in the political processes of the ruling dictatorship. He has presented his research throughout the U.S. and Canada and in Great Britain, Sweden, Singapore and Japan. His writings can be found in the New Grove Dictionary of Music and Musicians, The World of Music, The Encyclopedia of Popular Music of the World, Anthropology Today, The Chinese Journal of Ritual, Theater and Folklore, Burma at the Turn of the 21st Century and elsewhere. He is author of Music in Mainland Southeast Asia (Oxford University Press, 2010), a text that explores diversity, political trauma and globalization across Burma, Thailand, Cambodia and Vietnam.

In 2012, Kit Young returned from a twenty-year sojourn in Asia to Washington, DC where she teaches  on the music faculty of the Washington International School.  She pursued a career as solo and collaborative pianist and improviser/composer organizing concerts, festivals and exchanges with Asian colleagues in both contemporary and traditional musical forms from Thailand, Burma, Malaysia and China.

Ms. Young’s absorption in particularly Thai and Burmese music originates from her childhood living in Thailand studying Thai instruments, and a lifelong quest to answer  the question of how to hear and perform music from another culture, informing one’s own musical trajectory. Since 1987, Ms. Young studied the Burmese Sandaya tradition: Burmese traditional music styles performed on the piano. She worked with Myanmar/Burma’s greatest composer and sandaya player, Gita Lulin U Ko Ko among others and has performed extensively with Burmese musicians and dancers. Her 1991 debut performances of Burmese music at New York’s Metropolitan Museum and Symphony Space with Burmese colleagues were broadcast to Burma by the Voice of  America.  In 2013, she performed with Burmese theater troupe “Shwe Man Thabin” in the National Theater in Yangon, Myanmar. Ms. Young has lectured on topics in Burmese music and performed sandaya at many conferences, institutes and universities in Asia and the United States.

From 1992 to 2003, Ms. Young taught on the piano faculties of Thai universities, formed an improvising duo with Thai violinist and composer Nop Sotthibhandu.  She recorded two albums in Bangkok: TRI – violin and piano music of composers in Thailand and Akhanee Kita – improvisations with Nop Sotthibhandu on the HERE label.

In 2004, Ms. Young,  founded with Burmese colleagues Gitameit Music Center(www.gitameit.com) with campuses in Yangon and Mandalay. Work with Burmese theater artists, poets and musicians led to her compositions for two collaborative theater-media productions awarded grants by the Asian Cultural Council: Nya La Ka and The Monsters of Inya Lake.  Her songs setting the poetry of U San Oo for baritone and accompanying instruments were performed by Thomas Buckner and colleagues in San Francisco, Yangon, Beijing and New York.   Her work  For the Real Question with text by Vaclav Havel was performed by Gitameit Voices and Thomas Buckner on numerous occasions in Burma and in the United States.

While living in Beijing, China, Ms. Young formed an improvising duo with Wu Na, an award-winning gu qin player exploring modalities of extended piano techniques, and T’ang dynasty repertoire.  The Thai Embassy in Beijing sponsored Ms. Young and Wu Na to perform concerts in Beijing and Hang Zhou with Thai dancer Pichet Klunchon in 2011.  Ms. Young composed music for a Chinese production of  Harold Pinter’s “Betrayal” directed by Li Jiang Jun for the third China Fringe Festival in 2010 and was a member of the Beijing New Music Ensemble from 2009 to 2011.  Another grant in 2011 from Asian Cultural Council funded concerts by American,  Myanmar/Burmese musicians and Chinese musicians performing new works at the Beijing National Center for Performing Arts, Central Conservatory and at Western Academy Beijing  where Ms. Young taught from 2009 -2011.

I studied my high school at B.E.H.S (1) in Tamu. Got five distinction in 8th standard and participated in many school activities as a band leader, harmonica player and keyboard player in Dobat Group (Traditional Music Band) from 8th to 10th standard.

Although I got a respected rank in animation industry, my passion to music never disappeared. One day my mentor Ko Wunna who knows my passion asked me whether I want to study piano or not. His idea is if I can play piano, he could also asked me to play Myanmar Video Dubbing.

Being a person who is studying Myanmar piano, I noticed the situation of Myanmar music. The lack of archiving and preservation weaken every scholar’s enthusiasm. At the same time Ms. Kit Young and Mr. Chris Miller got AFCP grant (Ambassador Fund for Culture Preservation). We hired a room in Summit Park View hotel where we can get 24 hours electric. Under the management of Chris Miller, an ethnomusicology and archivist, transferred almost 3000 Burmese 78 rpm records into digital format.

And also I worked as an interviewer, cameraman and editor in Oral History project (recording the experience and life of elderly Myanmar musicians). I already met and had interviewed over 40 elderly musicians from Yangon, Monywa, Mandalay and Kayuk Pa Daung. Interviewees are musicians, dancers, comedians, singers, consecrators and writers on music.

By doing so, I realized that collecting old records and interviewing old musician could fulfill the need of Myanmar music history. There are a lot of hidden music treasures we can found not only in records but also in cassette tapes. Most of records were disappearing and damaging due to the lack of preservation and the ignorance of the peoples.  So the last one what I am doing at the moment is digitizing old cassette tapes to wave format. I hope that I would be able to build Burmese music library in future.

Apart from those projects, I am teaching piano at Gitameit Music Center and also librarian which is the first music library of.