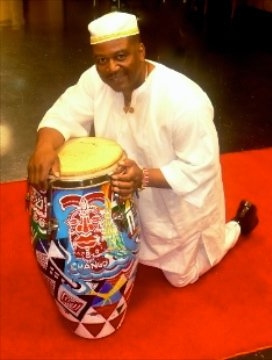 Music of the Garifuna Tradition of Honduras

Fall Quarter Ethnomusicology Visiting Artist Ricardo Guity is joined by his students in this concert of music from Honduras.  With special guests Silvia Blanco and members of Hagucha Garinagu.

Born in Honduras of the Garifuna people ­­ descendants of Africans and Carib­Indians who resisted slavery ­­ Ricardo Guity moved to the United States with his family at age seven. Steeped in the rich rhythms of his culture from a young age, Ricardo excelled as a prodigy of the renowned African master drummer, Babatunde Olatunji, debuting onstage at age 10.

Ricardo also performed with his father, Justo Guity ­­ a saxophone player ­­ from a young age, honing his percussion skills while absorbing a wide array of musical genres, from the Latino styles of salsa, merengue, and cumbia, to pop, rock, reggae, and the blues.

In his twenties, Ricardo began exploring the music of his native culture, Garifuna, joining the Yurumei* band and Gatos Bravos. He later co­founded the folkloric band Wuguchu (meaning "roots" in the Garifuna language), and was a key player in developing Punta Rock, a contemporized version of Garifuna rhythms that has since gained international recognition.

Ricardo has been honored with many music awards, individually and with groups, including the Boston Jazz Festival and the Minnesota Music Awards. Particularly meaningful was the Bicentennial Award (1997) from his native country, Honduras, for the Yurumei band, which headed up the bicentennial celebration. This major event marked the 200 years since the marooning of two slave ships at St. Vincent, which signified the birth of the Garifuna people in Honduras and Central America.

In 1995, Ricardo founded Kisum International Enterprises, LLC, an organization dedicated to promoting music of the African diaspora, with a particular focus on developing programs and opportunities for children. Kisum International is now ChangoDina Enterprises, LLC. Ricardo is currently working on a folkloric project that features the music of his people, the Garifunas, which include the African­influenced rhythms of Punta, Guanaragua, Paranda and Dugu.

* "Yurumei" means St. Vincent in the Garifuna language ­ the island where, in 1797, two slave ships laden with African captives were shipwrecked off the coast of Bequia. With the help of the native Carib­Indians, the Africans overpowered the crew of the Spanish ship and escaped. The mixing of the African and Carib­Indians marked the beginning of the Garifuna people and culture.