Music from the War to End All Wars: Music of Debussy and De Falla; Pre-Concert Lecture by Dean Robert Stacey 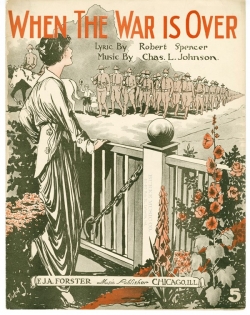 A special series produced by piano professor Robin McCabe explores music and ideas influenced by the terrible events of the Great War.

This series, produced by piano professor Robin McCabe in honor of the 100-year anniversary of the start of World War I, features music composed during the Great War, with historical context offered in commentary and narration. Pre-concert lectures by UW scholars, including Dean Robert Stacey (History), Prof. Ronald Moore (Philosophy), and Prof. Steven Morrison (Music Education) present a variety of perspectives from which to consider the profound impacts of the War to End All Wars.

The debut concert features works by Debussy and De Falla, with a pre-concert lecture, “A Gathering Storm? Artistic Crisis and the Coming of the First World War,” by Robert Stacey, UW history professor and dean of the College of Arts and Sciences.

A Gathering Storm? Artistic Crisis and the Coming of the First World War

European artists and intellectuals faced a growing sense at the end of the 19th century that a tired, staid, worn-out, and decidedly uninspiring artistic world was collapsing. Concurrently, they experienced a sense of responsibility to hasten that world to its grave. But in clearing the ground, in effect, for the artistic world of the new century to emerge, they found themselves unprepared for the deeply unexpected (and in some cases, horrifying) ways that the new artistic world differed from the older one. Moral of the story: When one clears the ground, the new plants that spring up may not be what one expects or wants.  But once grown, they cannot be shoved down again beneath the soil.

Sonata for Violin and Piano

Stacey, professor of history, has served as dean since January 2013, after one year as interim dean, four years as the College’s divisional dean of arts and humanities and an earlier stint as divisional dean of the social sciences. Since joining the UW faculty in 1988, Stacey has held numerous administrative posts, including chairing the Department of History, serving on the Faculty Senate, heading the UW’s Advisory Committee on Intercollegiate Athletics, and chairing the University Academic Council. Stacey’s scholarly work focuses on the history of Jews in medieval England. In 1997, he received the UW Distinguished Teaching Award. In addition to his other duties, Stacey has been a popular speaker at the UW Alumni Association’s lecture series.