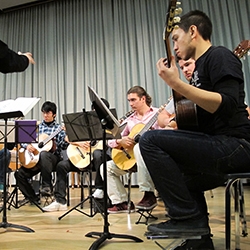 Michael Partington is one of the most engaging of the new generation of concert players. Praised by Classical Guitar Magazine for his "lyricism, intensity and clear technical command," this award-winning British guitarist has performed internationally as a soloist and with ensembles to unanimous critical praise..

Since moving to the USA he has received awards in several guitar, instrumental, and concerto competitions. He has appeared throughout the USA, UK, Russia, and Scandanavia in solo recital, ensemble, and with orchestra. He has performed live on radio stations throughout the US and UK, including BBC Radio 3's In Tune, BBC Wales, and St. Paul Sunday on National Public Radio, and cable television in California, Montana and Washington.

He has released five solo CDs for Rosewood Recording and can also be heard on the Cadenza Music and Present Sounds labels.