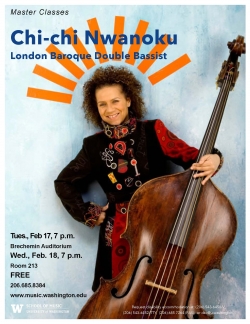 Chi-chi Nwanoku was born in London of Nigerian and Irish parents, and is the oldest of five children. She spent two years of her early childhood living in her much loved fatherland, Imo State, Nigeria. She continues to visit at every opportunity with her children. At the age of seven she discovered music on a neighbour’s piano, and was so inspired by it’s sounds and possibilities that she began her education as a classical musician.

A year later Chi-chi was ‘spotted’ by an athletics coach, and took on intensive training as a 100-metre sprinter. She reached competition at ‘national’ level within ten years, but this career ended very abruptly following an unfortunate knee injury. Fortunately her other passion as a classical pianist had continued alongside her athletics, and she was able at the age of eighteen to take up the double bass and pursue a career in music.

She studied at the Royal Academy of Music and with Franco Petracchi in Rome, and soon found herself in demand internationally. She has become one of England’s most sought after double bass players, and has developed a worldwide reputation as one of the finest exponents on her instrument today. Chi-chi plays a unique historical instrument built by Nicolas Amati (Cremona), dated 1631.

Her first professional position was as Principal double bass with the London Mozart Players, and since then she has performed and recorded as principal and soloist with many of Europe’s prestigious chamber orchestras and ensembles. These include the Academy of St Martin’s-in-the-Fields, English Baroque Soloists, London Classical Players and the Orchestre Revolutionnaire et Romantique. She is Principal Double Bass and a founder member of the Orchestra of the Age of Enlightenment and Endymion Ensemble.

Chi-chi is Professor of Double Bass Historical Studies at The Royal Academy of Music, and gives Masterclasses as a visiting Professor at Conservatoires worldwide. She is involved in a number of musical organisations, and is on the Board of the National Youth Orchestra of Great Britain, Association of British Orchestras, and Royal Philharmonic Society. She is Patron of Kuumba Youth Music, a Patron of the Mayor of London’s Fund for Young Musicians, Music Preserved, Kew Music Festival and the Cherubim Trust

Chi-chi was awarded an MBE for services to Music in the 2001 Queen’s Birthday honours. She was voted one of the 100 – Happy List in the Independent on Sunday 2011.

Chi-chi has a wide range of musical interests, resulting in her involvement in the cutting edge of diverse styles of performance practise. This includes authentic style baroque performances, through the periods until the contemporary.

She has made many symphonic recordings as orchestral principal.

Chi-chi presently lives in London with her two lively children, Jacob and Phoebe, who through their own shared interests have led Chi-chi back to ‘the track’ where she has begun to compete over 100 metres again…as a veteran!