Music from the War to End All Wars: Music of Ravel, Bartok, and Prokofiev; Pre-concert lecture by Prof. Ronald Moore 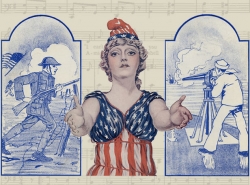 This series, produced by piano professor Robin McCabe in commemmoration of the centennial of the beginning of the Great War, features music composed during World War I, with historical context offered in commentary and narration. This concert features music by Ravel, Bartok, and Prokofiev, with a pre-concert lecture, “Music in the silentness of duty; peace where the shell-storms spouted red,” by UW philosophy professor Ronald Moore.

Pre-Concert Lecture:
Ronald Moore, Professor of Philosophy
Music in the silentness of duty; peace where the shell-storms spouted red

Poets and musicians worked to find meaning in the unimaginable suffering and loss of the Great War. The unprecedented amount of combat loss, the volume of national engagement, the absence of any sign that it would end held Europe in a horrible pall. The great war poets reflected on this dreadful, remarkable state as well as on the heroism of those who continued to throw themselves into battle, and produced some extraordinary perceptions about the best and worst of humanity.

I have perceived much beauty in the hoarse oaths that kept our courage straight
Heard music in the silentness of duty;
Found peace where shell-storms spouted reddest spate.

Professor Moore received his bachelor's degree from Stanford University, and his PhD from Columbia University. He did post-doctoral study at Harvard Law School as a Liberal Arts Fellow. Previously to his appointment at the UW, he taught at the University of Hawaii. He has chaired the UW Faculty Senate, has served on the UW Medical Center Board of Directors, and has directed the UW Center for the Humanities. He is fond of beauty and goodness.