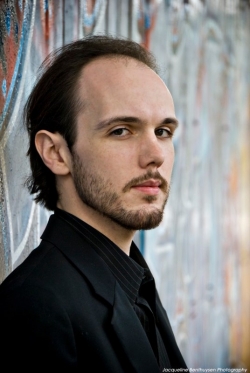 School of Music alumnus David Brooks, now on the faculty at Wingate University in Charlotte, North Carolina, performs works by CPE Bach, Messiaen, Grieg, Schoenberg, and Rachmaninoff on Jan. 5 and leads a master class with UW piano students on Jan. 6.

David Brooks enjoys a multifaceted musical life as a pianist, violinist, violist, composer, and teacher. As a performer, he plays a repertoire ranging from Alkan to Zwilich, spanning the avant-garde and neglected romantics, as well as the established greats.  David has performed across the United States and Europe, recently performing a solo recital in Paris at La Cathédrale Américaine.  Of a performance at Boston's Gardner Museum, the Boston Globe called his playing "especially lush."  Compass News said of another performance, "Brooks left the audience stunned and speechless."

Committed to the performance of new music, David has taken part in the world premiers of more than 30 compositions, performing works by Rzewski, Boulez, Cage, Schoenberg, Liebermann, Ornstein, and Feldman, among others.  As a composer and transcriber, David has transcribed a wide array of works for solo piano by composers ranging from Bach to Penderecki.  In 2013, his song cycle First Steps was performed in Romania, and in 2014 his Escherisms will be premiered at SymphonySpace in New York.

A dedicated teacher, David joined the faculty of Wingate University in Charlotte, North Carolina in 2014.  David previously taught at Adelphi University, and at the Pre-College Academy of Stony Brook University. In Seattle, he also taught a studio of award-winning piano students at the University of Washington.

David currently lives in New York and studies with Christina Dahl at Stony Brook in the Doctoral program. David holds degrees in both piano and viola performance from Western Washington University, where he studied piano with Jeffrey Gilliam, viola with Eric Kean, and violin with Walter Schwede.  While at WWU, he was awarded the Presser Foundation Scholarship, Western’s highest honor, and was the violist of the Ravenna String Quartet.