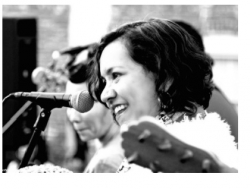 The University of Washington School of Music programs in Ethnomusicology and Music Education present a songwriting workshop and community fandango led by Queztal, a Grammy award winning duo featuring Martha Gonzalez and Quetzal Flores. In this workshop, the artists will discuss the collective songwriting process as it is utilized by Chican@ Artivistas (artist/activists) in East L.A.

A song as a sonic and literary manifestation is life’s soundscape, a unique, cathartic memento as well as a powerful political tool. A song can also be an important historical text. A person’s testimonio (testimony), life views, triumphs, aphorisms, and struggles can be expressed in song lyrics. In this way, song lyrics can transmit ways of knowing and theorizing about life. It can also be viewed as alternative ways of creating knowledge. When practiced in community, songwriting can be a powerful exercise in consensus building and collective knowledge production.

Dr. Martha Gonzalez and Quetzal Flores will discuss the collective songwriting process as it is utilized by Chican@ Artivistas (artist/activists) in East L.A. towards different ends. They will share the history and development of the method, the different stages of the process and the significance it has had in Chicano Latino communities in East LA.

Growing up in social movements as the son of grassroots organizers, Quetzal Flores inherited an undying accountability to community struggles.  Since 1993, he has worked as the founder and musical director of the Grammy® Award-winning East LA Chican@ rock group, Quetzal.  Through the combined practice of activism and artistic expression Flores identifies as a Chican@ Artivista.

With over twenty years of experience in arts practices in community settings his work is rooted in engaging the proactive imagination of communities in struggle.  Flores has been instrumental in cultivating the translocal dialogue between the fandango movement in Veracruz MX and Chican@/Latin@ US communities and is the co-founder of Seattle Fandango Project and FandangObon.

He currently serves as the Southern CA Program Manager for the Alliance for California Traditional Arts (ACTA), a statewide folk arts and cultures grants and advocacy organization.  He also sits on the Advisory Board for Smithsonian Folkways Recordings and the Boyle Heights Arts Conservatory

Martha Gonzalez was born and raised in East Los Angeles and is a Chicana artivista (artist/activist) musician, feminist music theorist and Assistant Professor in the Intercollegiate Department of Chicana/o Latina/o Studies. Gonzalez has an undergraduate degree in Ethnomusicology from UCLA and a PhD in Feminism from the University of Washington, Seattle. A Fulbright (2007-2008) and Ford Fellow (2012-2013) she has published extensively on Chican@ music popular culture, and music as social movement.

Her academic interest in music has been fueled by her own musicianship as a singer/songwriter and percussionist for East L.A’s Quetzal for over 20 years. Quetzal has made considerable impact in the Los Angeles Chicano music scene. The unique blend of East Los Angeles sounds as well as the social justice content in the work has sparked dialogue and theoretical work among various artist communities, culture theorists, and scholars across the country, Mexico and Japan.

The relevance of Quetzal’s music and poetry work has been noted in a range of publications from dissertations to scholarly books. Quetzal has been invited by the U.S. Library of Congress and Kennedy Center as well as the recent  Ralf Rinzler Concert and panel discussion, paying special tribute to Pete Seeger.

In addition, the traveling exhibit “American Sabor: Latinos in U.S. Popular Music” sponsored by the Smithsonian Institute, featured Quetzal as leaders and innovators of Chicano music. This feat coupled with their Grammy Award winning album on the Smithsonian Folkways label, “Imaginaries” marks the importance of her past and ongoing work. Most recently and as a testament to the body of music and community work, in the summer of 2014 Gonzalez’s tarima (stomp box) and shoes were acquired into the National Museum of American History.

Professor Gonzalez is currently working on her manuscript titled Chicana Artivistas: East Los Angeles Trenches Transborder Tactics. To the Claremont Consortium, Gonzalez has introduced such courses as: Fandango as a De-Colonial Tool and Chican@ Music: From Genre to Experience, Women Who Rock: The Archive, Popular Music and New Media, and a Core III Course: Collective Songwriting: Knowledge and Theory.